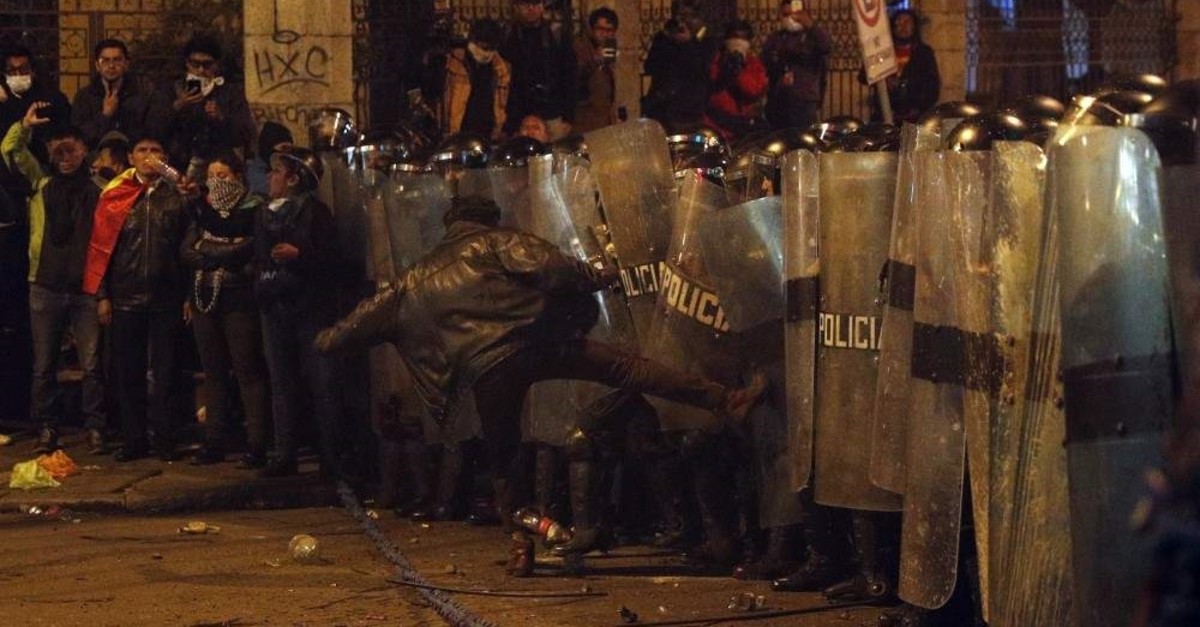 A man kicks police shields during a protest against the reelection of President Evo Morales outside the top electoral court, La Paz, Oct. 24, 2019. (AP Photo)
by Compiled from Wire Services Oct 25, 2019 7:03 pm

Venezuelan President Nicolas Maduro on Friday said his Bolivian counterpart Evo Morales was facing a foreign coup attempt, referring to violent protests and allegations of fraud after his re-election.

"We express our solidarity with the Bolivian people and specifically with our brother, President Evo Morales Ayma," Maduro told a summit of the Non-Aligned Movement (NAM) in the Azerbaijani capital Baku.
Morales "is facing a destabilization campaign, he is facing an attempted coup d'etat from external forces that try to deny Bolivian voters, the Bolivian people their democratic rights," he said. "We have to recognize the legitimacy of Evo Morales' Ayma's victory in Bolivia."

Morales on Thursday was officially declared the outright winner of presidential elections for a fourth successive term. He had secured 47.1% of the vote, against 36.5% for his closest rival Carlos Mesa.

Maduro has thwarted several coup attempts against his government. The U.S. has made three attempts this year and failed to remove Venezuela's democratically elected Maduro from power.
After an uprising in Venezuela quickly fizzled out, President Maduro blamed the U.S. government for orchestrating a coup attempt against his country. The military has supported Maduro and refused to back opponent Juan Guaido, who declared himself interim president in January and has backing from dozens of countries, including most of Latin America and the U.S. Maduro has called Guaido a U.S-backed "puppet" who seeks to oust him in a coup.