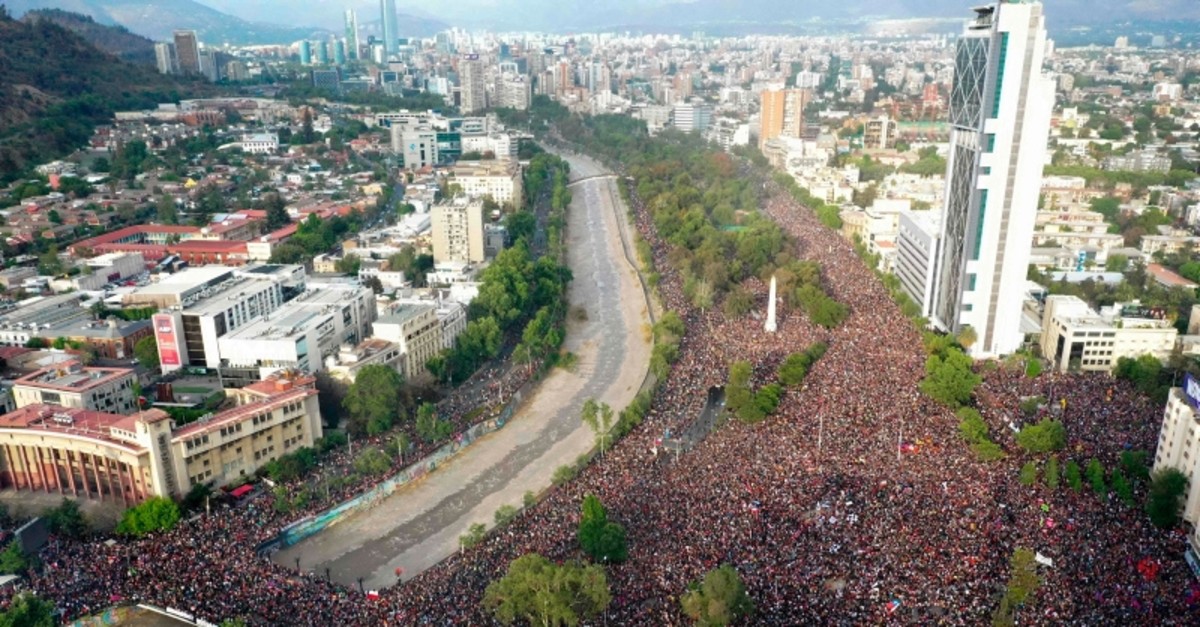 Almost a million people took to the streets of Santiago for what was believed to be Chile's largest-ever march Friday, demanding economic reforms and the resignation of President Sebastian Pinera following a week of deadly protests.

Demonstrators carrying indigenous and national flags sang popular resistance songs from the 1973-90 Augusto Pinochet dictatorship era as the country, usually seen as one of the most stable in Latin America, grapples with its worst violence in decades.

Santiago's governor Karla Rubilar described it as "a historic day" on Twitter, praising "a peaceful march of nearly a million people representing the dream of a new Chile."

For the last week, Chileans' pent-up anger has spilled over in the form of protests against a socio-economic structure that many feel has left them by the wayside, with low wages and pensions, costly health care and education, and a big gap between rich and poor.

Pinera, a conservative billionaire, apologized this week for failing to anticipate the outbreak of social unrest and announced a raft of measures designed to placate people, such as increases in minimum pensions and wages.

He also announced a plan to end a deeply unpopular state of emergency and to lift a nighttime curfew, although both of those are now into their seventh day.

On Friday he called on legislators to "urgently approve these projects rather than arguing and debating so much."

Francisco Anguitar, a 38-year-old artificial intelligence developer attending the demonstrations, said the protests would probably "be the biggest ever. We're asking for justice, honesty, ethical government."

Security forces have been blamed for five of the 19 protest-related deaths. Social media have lit up with accusations of torture and abuse.

The United Nations said on Thursday it was sending a team to investigate the allegations.

Serious incidents and arrests have decreased in recent days compared with the beginning of the protests.

But the violence has still been the worst since Chile returned to democracy after Pinochet's right-wing dictatorship.

As demonstrators passed by the presidential palace in central Santiago, they hurled insults at Pinera and the military.

While the mass street movement appeared organized, it still lacks recognizable leaders and was mostly roused through social media.

Regular media has also found itself a target of protesters' ire with via leaflets calling for people not to turn on their televisions.

Earlier on Friday, cars and trucks took part in a protest against highway tolls, moving at snail's pace as they clogged highways and formed long caravans on roads leading out of the capital city.

"If this is not resolved with concrete measures, this nation that has risen up is going to keep protesting," Leiton said.

The latest demonstrations came after a two-day strike on Wednesday and Thursday arranged by Chile's largest and most powerful trade union, although in Santiago business continued as usual for the most part.

The national human rights institute — INDH — said 584 people have been injured, 245 by firearms, and 2,410 detained during the protests.

Soldiers have been guarding Santiago's metro stations as three of the seven lines — which usually carry three million people per day — have reopened.

The government said Thursday that next month's APEC trade summit in Santiago would go ahead despite the protests.

US President Donald Trump and his Chinese counterpart Xi Jinping are among those expected to attend the November 16-17 meeting to discuss ending their trade war.