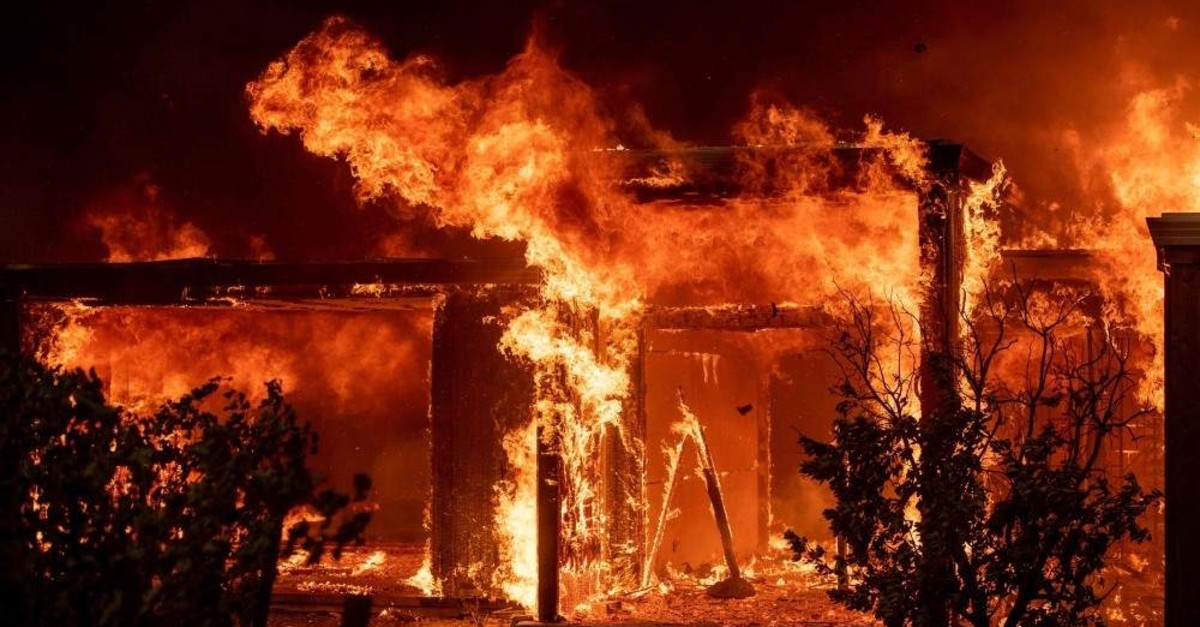 Flames consume a home during the Kincade fire as flames race through Healdsburg, California on October 27, 2019. (AFP Photo)
by French Press Agency - AFP Oct 28, 2019 10:45 am
California's governor declared a statewide emergency on Sunday as a huge blaze, fanned by strong winds, forced mass evacuations and power blackouts as it bore down on towns in the famed Sonoma wine region.
The so-called Kincade Fire, north of San Francisco, has spread to 30,000 acres (12,000 hectares) and was only 10 percent contained by Sunday evening, state fire authorities said.
The blaze, the largest of more than a dozen wildfires burning throughout the state, has destroyed dozens of homes and vineyards, including the renowned 150-year-old Soda Rock Winery.
"We've seen the news. We are devastated," the owners said in a Facebook message, adding that all staff at the winery — located in the town of Healdsburg, 70 miles north of San Francisco — are safe.
At least two hospitals in Santa Rosa evacuated patients over the weekend to other facilities.
The Kincade Fire — the most devastating in California this year — ignited Wednesday and spread quickly thanks to powerful gusts of up to 90 miles (145 kilometers) per hour.
"Over 3,000 people are working on the fire as we speak, making sure the evacuation is going smoothly and people are taking it seriously," said state governor Gavin Newsom.
An estimated 180,000 people were under mandatory evacuation orders, including in parts of Santa Rosa and a large swath of Sonoma County all the way to the Pacific Ocean.
'Largest evacuation in memory'
"This is the largest evacuation that any of us at the Sheriff's Office can remember. Take care of each other," the Sonoma County sheriff's office tweeted.
Authorities said the area would remain under dangerous red flag conditions until Monday morning.
"Things will improve as we head into Monday and Tuesday but we need to be resilient," a spokesman for the National Weather Service told a news conference.
A fire official warned that should the flames continue spreading west and jump over a major freeway — the 101 — that could prove even more catastrophic, as that region hasn't had any fires since the 1940s.
"The fuels in that area are extremely dense, they are extremely old and decadent, and they are extremely dry," he said, referring to the combustible materials including shrubs and trees feeding the fire.
More than 3,000 firefighters backed by air tankers and helicopters were battling to control the blaze, which was not expected to be contained before November 7, fire officials said.
Police to prevent looting
Sonoma County Sheriff Mark Essick told a news conference that hundreds of police officers backed by the National Guard had been deployed in regions under evacuation orders to check property and prevent looting.
Several other fires have erupted throughout the state in the last week, fueled by high winds, bone-dry conditions and temperatures in the 80s and 90s Fahrenheit (26-32 Celsius).
One major fire — the Tick Fire — in the southern part of the state, north of Los Angeles, also prompted evacuations and destroyed a number of homes near Santa Clarita.
But on Sunday, most evacuation orders were lifted as some 1,000 firefighters worked to contain the fire that burned more than 4,500 acres.
In a bid to reduce the risk of fire, California's largest utility, Pacific Gas & Electric Co., said it expected to turn off power to nearly one million customers across northern and central California.
"Winds of this magnitude pose a higher risk of damage and sparks on the electric system and rapid wildfire spread," the company said in a statement. "The fire risk is even higher because vegetation on the ground has been dried out by recent wind events."
PG&E has come under intense scrutiny after it emerged that one of its transmission lines may have played a role in the Kincade Fire.
The same type of line was responsible for California's deadliest-ever wildfire — last year's Camp Fire, which killed 86 people.
PG&E, which filed for bankruptcy protection earlier this year, has been blamed for several other fires in the state in recent years.
Newsom hit out at the utility earlier this week, saying he was infuriated that a state such as California — which boasts the fifth-largest economy in the world — had to endure blackouts.
Last Update: Dec 20, 2019 1:16 am
RELATED TOPICS