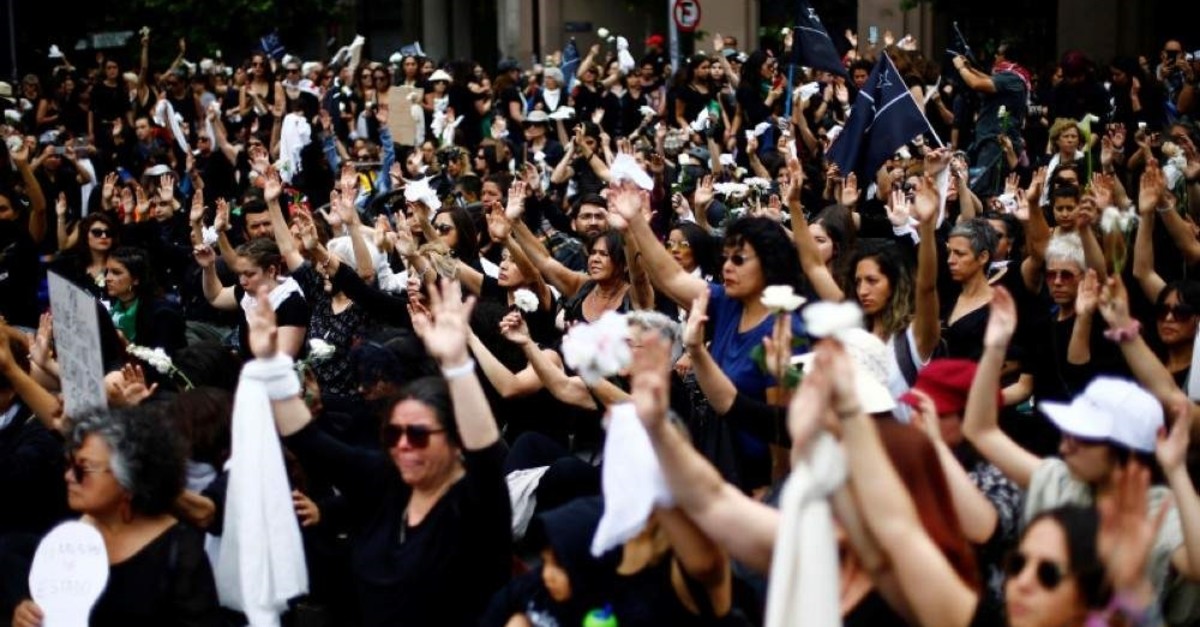 People participate in a demonstration to pay tribute to people killed during the protests against Chile's government, in Santiago, Chile November 1, 2019. (Reuters Photo)
by Compiled from Wire Services Nov 02, 2019 10:35 am

Dressed in black, carrying white carnations, marching silently and raising one fist, around a thousand women on Friday demanded justice for those killed and injured during the last two weeks of social unrest in Chile.

Their march started off a day of demonstrations on a long weekend in the country, expanding later as tens of thousands answered social media calls to match last Friday's huge protest that attracted more than a million people.

Santiago authorities said the protest in the city drew about 20,000 demonstrators, including many young people and families. Isolated clashes broke out after security forces tried to disperse protesters with tear gas and water cannon.

"Justice, truth, no to impunity," chanted the women marchers in front of the presidential palace in central Santiago, as their silent protest burst to life.

They held up signs paying tribute to the 20 people killed and more than 1,300 injured during the protests, according to statistics provided by the National Human Rights Institute (INDH).

Protesters, whose rally coincided with the Christian holiday of All Saints Day, stood in silence holding one fist aloft in front of impassive police guarding the presidential palace.

"We're not going to back down until the government answers us about the deaths. We feel betrayed by this government," Marco, a 22-year-old student, told AFP.

In the central Plaza Italia square, which has been the epicenter of the protest movement these last two weeks -- thousands waved Chilean and Mapuche indigenous flags.

Protesters in this country of 18 million people are angry about low salaries and pensions, poor public health care and education, and a yawning gap between rich and poor in Latin America's wealthiest country on a per capita basis.

The unrest began with protests against a rise in metro ticket prices and other austerity measures that descended into vandalism, looting and clashes between demonstrators and police.

Many protesters have demanded the resignation of billionaire President Sebastian Pinera.

Opposition leaders say that's not enough and like many protesters, they demand a new constitution to replace the 1980 charter written under Gen. Augusto Pinochet's military dictatorship, which allows many social services and natural resources, including water, to be wholly or partially privatized.

Pinera said Wednesday that he was canceling the Asia-Pacific Economic Cooperation and U.N. global climate gatherings, which were planned for November and December, due to the chaos unleashed by the protests in one of the wealthiest, but most unequal counties in Latin America.