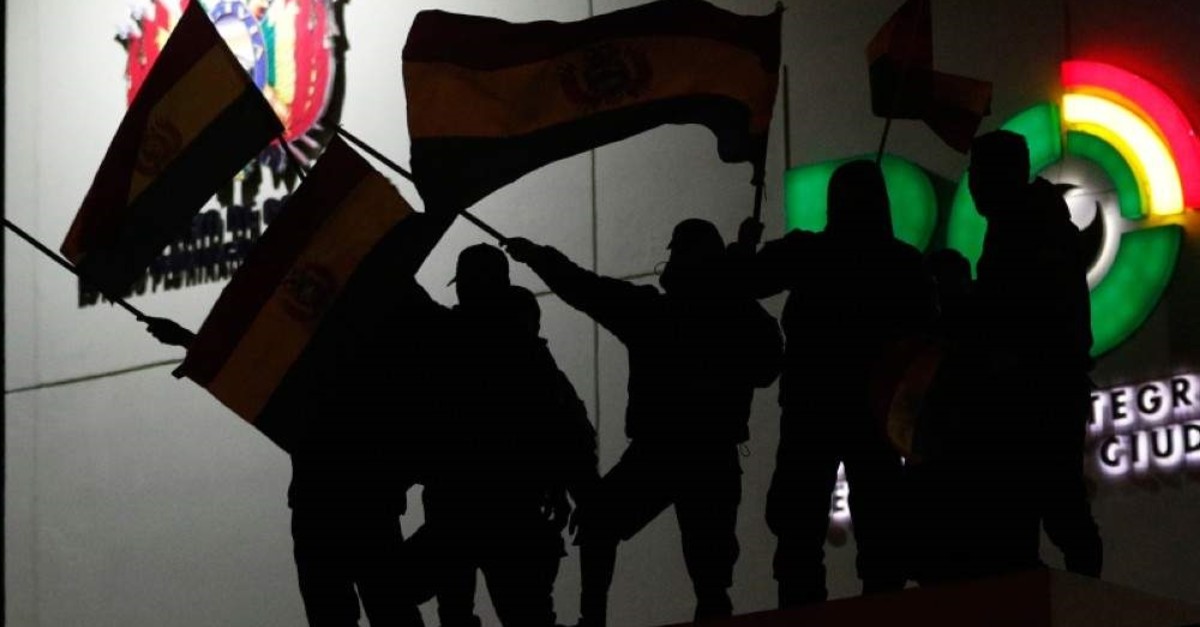 Police officers standing on the rooftop of a security booth at a police station wave Bolivian flags in front of protesters in La Paz, Bolivia, Saturday, Nov. 9, 2019. (AP Photo)
by Compiled from Wire Services Nov 10, 2019 1:01 pm

Opposition demonstrators in Bolivia overran two state-run media outlets and forced them off the air Saturday and some police abandoned their posts on the square where President Evo Morales' palace is located, as tensions remained high after a disputed election.

Demonstrators burst into the offices of Bolivia TV and Radio Patria Nueva and forced employees to leave, accusing them of serving the interests of Morales, said the director of the latter of the two, Ivan Maldonado.

"We were evicted by force after receiving constant threats from people gathered outside," Maldonado told Agence France-Presse (AFP).

Some 40 employees were seen leaving the building that the two news organizations share in La Paz, walking hand in hand as a crowd of some 300 demonstrators yelled insults. Afterward, both outlets broadcast only music.

It was the latest thrust of a movement protesting alleged vote-counting fraud in the election last month that gave Morales a fourth straight term.

Morales denounced the seizure of the media outlets. "They say they defend democracy, but they behave as if they were in a dictatorship," he tweeted.

A radio station run by a farmers' union was also seized by protesters, Morales said.

He said opposition militants had also set fire to the home of his sister in the southern city of Oruro as part of what he called an effort to overthrow him.

Footage on social media showed the home of his elder sister Esther partially in flames. The homes of the regional governor and of Chuquisaca province governor were also set on fire.

Morales called earlier in the day for urgent, open-ended dialogue with opposition parties holding seats in the National Assembly, but he pointedly excluded the powerful regional civic committees opposing him.

An opposition leader, former president Carlos Mesa, immediately rejected Morales's gesture, saying, "We have nothing to negotiate with Evo Morales and his government."

Police units in some cities started protesting Friday, marching in the streets in uniform as anti-government protesters cheered them from the sidewalks.

During the night the rebellion reached other cities but mostly spared La Paz, the country's administrative capital, local media reported.

But in a worrying sign for the Morales government, the UTOP officers in La Paz who for weeks have closely guarded the central Plaza Murillo - where the presidential palace is located - abandoned their posts Saturday in evident solidarity with the protests, an AFP reporter observed. The sector remained guarded only by a small number of officers.

Officers also climbed onto the roof of a nearby police station holding Bolivian flags and signs proclaiming "The Police with the People." Morales, who was not at the palace at the time and appeared later at a military airfield outside La Paz, urged police to "preserve the security" of Bolivia and obey the rules.

"We'll never confront the people among whom we live. We guarantee peaceful co-existence," Kaliman said. "This is a political problem and it should be resolved within that realm."

A list of demands from dissident police officers included better working conditions, the resignation of their commander and guarantees that they won't be used as a political "instrument of any government."

The spectacle of police leaving their positions outside the presidential palace was an ominous development for Morales.

Opposition groups have branded the election result a fraud and demanded Morales's resignation. Three people have died so far and hundreds injured in unrest triggered by the protests.

The leftist president, Bolivia's first from the indigenous population, assailed the police action. Morales said Friday on Twitter that "our democracy is at risk from a coup d'etat launched by violent groups undermining the constitutional order."

Opposition leaders urged the military to follow in the footsteps of the rebellious police.

After the Oct. 20 vote, Morales, the country's first indigenous president, declared himself the outright winner even before official results indicated he obtained just enough support to avoid a runoff with Mesa.

But a 24-hour lapse in releasing vote results raised suspicions among opposition supporters that there had been a fraud.

Morales ran seeking re-election to a fourth term after refusing to abide by the results of a referendum that upheld term limits for the president. The country's constitutional court then ruled term limits violated his right to run for office.