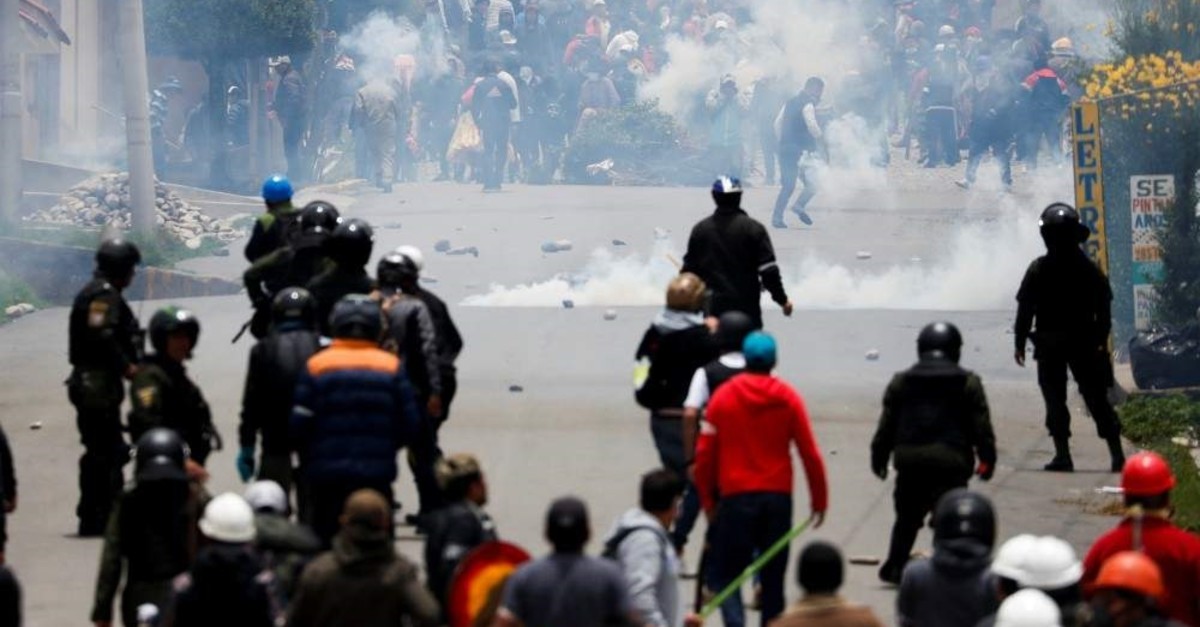 Supporters of Bolivian President Evo Morales and opposition supporters clash during a protest on Sunday, in La Paz Bolivia November 11, 2019. (REUTERS Photo)
by Daily Sabah with Agencies Nov 11, 2019 11:50 pm
Bolivia's interim president-in-waiting pledged Monday to call fresh elections amid protests over political uncertainty caused by President Evo Morales' resignation.
The deputy senate speaker, Jeanine Anez -- constitutionally in line to become interim president following Morales' resignation — said there will be "an electoral process that reflects the will of all Bolivians."
Supporters of the socialist leader set barricades ablaze to block some roads leading to the country's main airport as tension gripped the nation. Looting and fires were reported overnight in La Paz, but few soldiers were seen in the streets, broadcaster Todo Noticias reported.
"We want to protect citizens" from further violence, a young man who was manning a roadblock told Todo Noticias. Both sides, supporters of Morales and the opposition, blamed the other for the violence.
Morales made the announcement on Sunday after weeks of protests and rioting against alleged fraud in the November 20 elections, in which the leftist president took an outright victory against his centre-right challenger, Carlos Mesa.
There had been calls from the police and military on Morales to step down. The protests have left three people dead and hundreds injured.
Parliament was expected to announce who would become caretaker president after the resignations of Morales' deputy Alvaro Garcia Linera and the presidents of the Senate and of the Chamber of Deputies, who had been in line to take power.
About 20 senior officials resigned within 48 hours, including cabinet ministers, the head of the electoral tribunal, governors and mayors, according to local media.
It was expected that the presidency might be given to Senate Vice President Jeanine Anez, a member of the opposition, who tearfully accused Morales of having plunged Bolivia into chaos.
Morales on Sunday denied reports that he had fled the country, the national news agency ABI reported.
"I have no reason to escape, I want the Bolivian people to know that I have not stolen anything from anyone," he said in a reference to corruption allegations against him in Chimore in his home region of Cochabamba.
Last Update: Dec 20, 2019 1:37 am
RELATED TOPICS