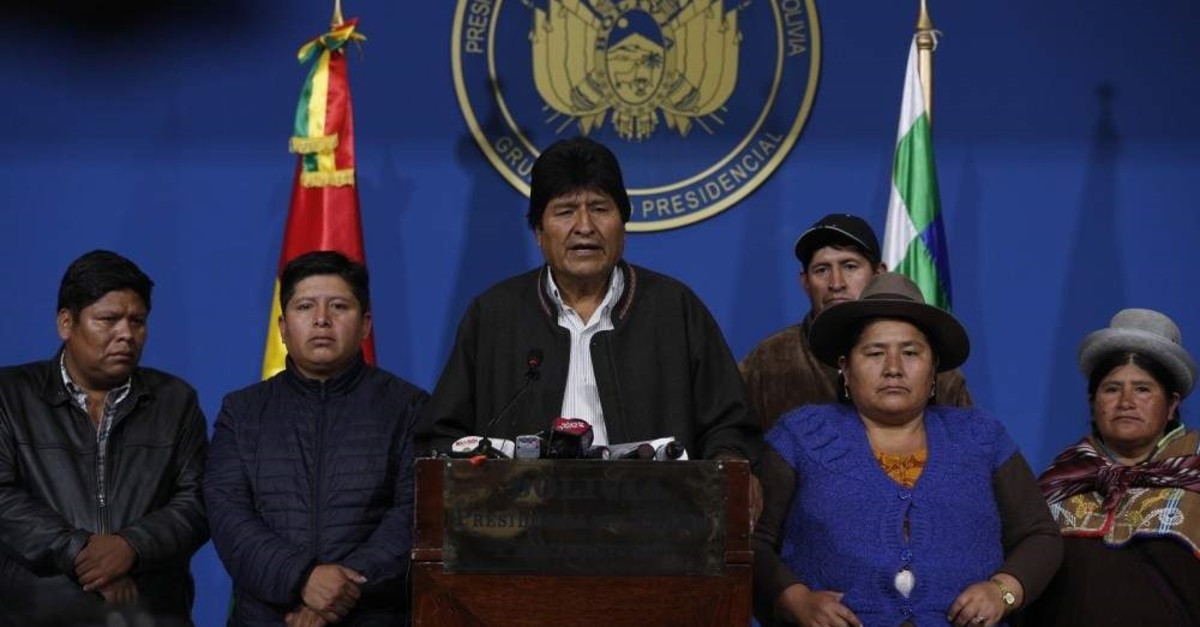 Bolivian President Evo Morales, a fierce critic of the U.S., has become a victim of the wave of violence against his government that forced him to resign, which was denounced as an orchestrated coup

The resignation of Bolivian President Evo Morales, the last serving member of the "pink tide" of leftist leaders that swept Latin America two decades ago, has faced reactions as the international community rejected the coup taking place in the country.

Morales, Bolivia’s first indigenous leader, ended his 14-year rule after allies deserted him following weeks of protests over a disputed Oct. 20 election that has engulfed the Andean nation. On Sunday, the Bolivian military and key political backers called on him to step down. His resignation was seen as a return to the bleak era of coup d’états overseen by Latin American militaries that long dominated the region through U.S. interventions.

A fierce critic of the U.S., Morales was a staunch ally of leftist governments in Cuba and Venezuela. The U.S. had attempted to remove Maduro for the third time this year. Maduro thwarted the latest coup attempt against his government as opposition leader Juan Guido's call on the military appeared not to have triggered a broader revolt. The military has so far supported the country's democratically elected President Maduro and refused to back Guaido, who declared himself interim president in January and has backing from dozens of countries, including most of Latin America and the U.S.

Cuba's Foreign Minister Bruno Rodriguez described Morales as "a protagonist and a symbol of the rights of the indigenous peoples of our Americas." And Brazil's Lula insisted "my friend Morales" had been removed in a coup, evidence of "an economic elite in Latin America that did not know how to share democracy with poor people."
Turkey expressed concerns over the political unrest in Bolivia. “Turkey places great importance on governments coming to power democratically,” the Turkish Foreign Ministry said in a statement yesterday. “We are following the developments in Bolivia with concern following the resignation of Bolivian President Evo Morales. We wish the country to restore peace and stability through renewed elections in the direction of easing tensions, returning to normal life and respecting the democratic will of the Bolivian people.”
Hinting at U.S. involvement in the downfall of Morales, a former U.S. senator has sarcastically criticized the CIA for the military coup the country. "Congratulations on winning power in Bolivia, @CIA!" Mike Gravel said on Twitter on Sunday, in an apparent hit at the global spy agency. The former Alaska senator from the Democratic Party has long criticized the U.S. policies in Latin America.

"The lie you will hear ad nauseum is that socialist states failed spontaneously - in reality it was the concerted effort of the U.S. Imperial Machine to crush any nation that could oppose them any time it appeared," he tweeted in May.

The only reaction to the political developments in Bolivia came from the Muslim congresswoman Ilhan Omar who took to Twitter to define what happened in Bolivia as a "coup." Omar urged American lawmakers to "unequivocally oppose political violence in Bolivia."

Meanwhile, right-leaning governments in Latin America, backed by the U.S., called on the Bolivian state to ensure that the new elections are lawful. Brazil, under far-right nationalist Jair Bolsonaro, went further and welcomed Morales’ fall.

Morales became president in 2006, joining Chavez, Argentina’s Nestor Kirchner and Brazil’s Luiz Inacio Lula da Silva in a left-wing surge across the continent that refashioned state institutions and polarized domestic politics. The end of a long commodities boom in Latin America saw some left-leaning governments replaced by conservative administrations. However, since last year, anger at corruption, inequality and poverty has pushed conservatives out in Mexico and Argentina, while fueling protests in recent weeks that forced governments in Ecuador and Chile to water down liberal economic policies.