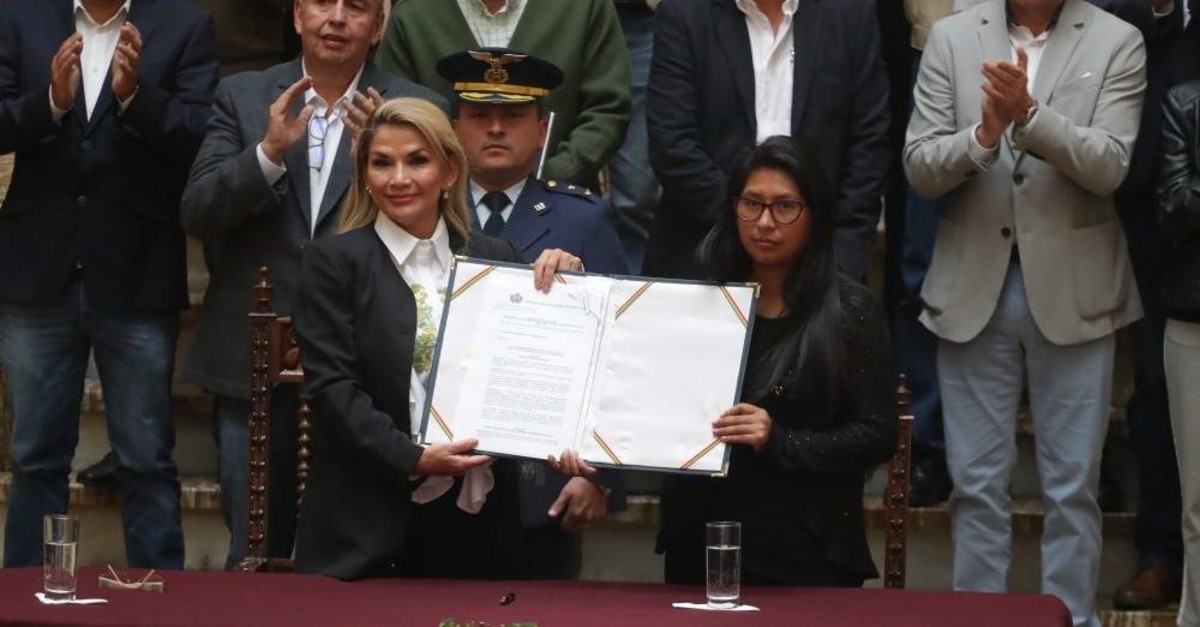 Bolivia's interim President Jeanine Anez signed off on new elections Sunday, in a key step toward ending weeks of unrest.

At least 32 people have been killed in violence that erupted after a disputed election on Oct. 20, with blockades causing severe fuel and food shortages in La Paz and other cities.

Congress on Saturday gave the green light for a new vote without Latin American leftist icon Evo Morales, Bolivia's first indigenous president who had been seeking a fourth term after ruling the poor but resource-rich Andean country for nearly 14 years.

He fled to Mexico, where he was granted political asylum following his Nov. 10 resignation, after losing the support of the military.

"We are going to recover democracy with democracy," Anez said during a ceremony at the government palace in La Paz.

Among other things, the law annuls the results of the Oct. 20 vote and allows for new elections.

It also bars candidates who served in both of the two previous terms from seeking re-election for the same position.

That prevents Morales from contesting the presidency in the new ballot.

The next step will be for Congress to agree on a new seven-member electoral court after members of the previous panel were removed for allegedly manipulating results.

The tribunal will be tasked with setting a date for the new vote, which Anez said previously she wants to happen as soon as possible.

It must be held within 120 days of the panel officially calling for new elections.

New elections are seen as key to ending Bolivia's worst political upheaval in 16 years, which has deepened divisions between indigenous people loyal to Morales and Bolivia's mainly city-dwelling middle and upper classes.

"Why? For everything to be transparent, as it always should be, for our vote to be respected in rural areas and everywhere. This is what is called democracy."

Morales' exclusion is another blow for leftist icons in Latin America where Brazil's Luiz Inacio Lula da Silva and Ecuador's Rafael Correa have fallen from power in recent years.

Bolivian prosecutors are investigating the interim government's accusations of sedition and terrorism against Morales after he allegedly called on supporters to maintain blockades in the landlocked country.

If Morales were charged and convicted, he would face a maximum penalty of 30 years in jail.
Morales' party divided

The fact that both houses of Congress, which are controlled by Morales' Movement for Socialism (MAS) party, passed the election bill excluding him, highlights the deep divisions within MAS over the left-wing leader and his future political role.

MAS senators on Saturday attempted to prohibit "judicial processes" against Morales, but the move was rejected outright by Anez, who told reporters that anyone "who has committed crimes, has mocked the law, has committed abuses, will not have any amnesty."

The new election law comes amid dialogue between the caretaker government and opposition groups aimed at ending violence and lifting crippling roadblocks.

A potential breakthrough in the crisis came Friday when the government announced it would hold talks with opposition groups to "pacify the country" and lift blockades on key transport routes, including the highway from La Paz to Bolivia's agricultural heartland Santa Cruz.

Discussions began Saturday and are expected to continue on Sunday.

"The pacification process is getting closer," Jerjes Justiniano, chief of the Cabinet, tweeted early Sunday.

A key demand of the protest groups is the repeal of Anez's presidential decree granting security forces immunity from prosecution for acts of violence.

Police on Thursday tear-gassed indigenous protesters who marched on La Paz with the coffins of five of the eight people killed in clashes at a key fuel plant near the city Tuesday.