US Navy base shooting 'act of terrorism,' no arrests made, FBI says 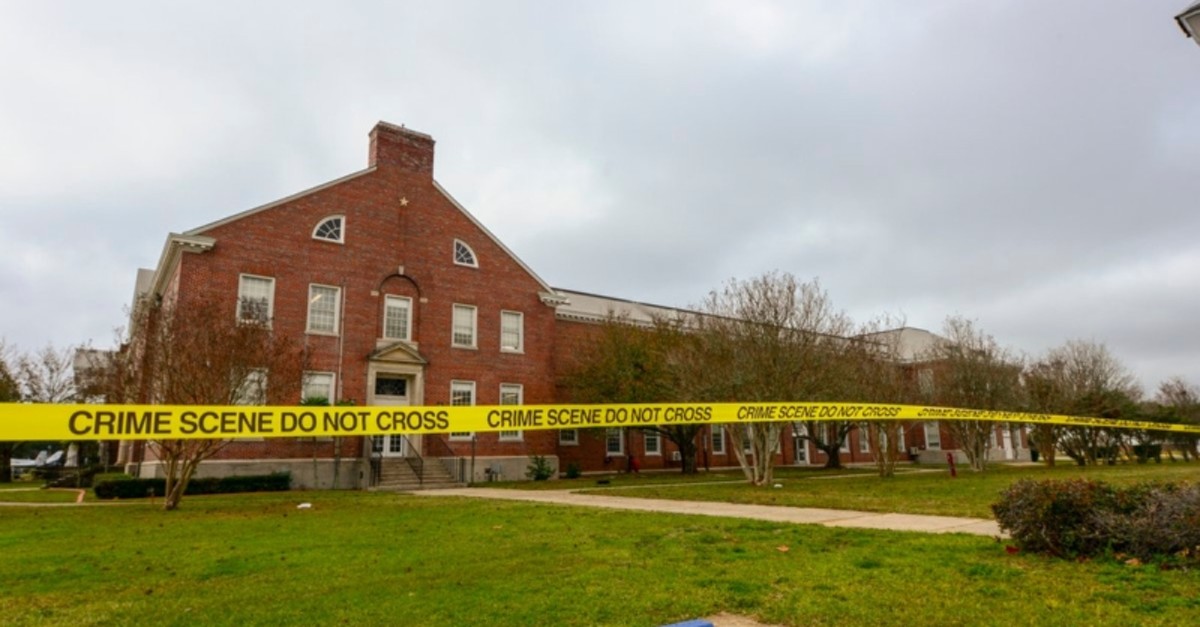 This handout photo released on Dec. 7, 2019 by the FBI shows Police tape stretching across a street near a building after an active shooting incident at a naval base in Pensacola, Florida. (Photo by Handout / FBI / AFP)
by Associated Press Dec 08, 2019 9:27 pm

The FBI said late Sunday it's working under the presumption that the Florida naval base shooting was an act of terrorism, and that no arrests have been made in the fatal incident.

An FBI special agent also said all international students at the base have been accounted for.

The information comes three days after an aviation student from Saudi Arabia opened fire in a classroom at the Naval Air Station Pensacola on Friday, killing three people. The shooter also died. Eight others were wounded but all are expected to recover.

Investigators believe the Saudi gunman visited New York City, including Rockefeller Center, days before the shooting and are working to determine the purpose of the trip.

Authorities also believe the gunman made social media posts in which he talked about U.S. support for Israel and charged that Americans are anti-Muslim, said the official, who was not authorized to discuss the matter publicly and spoke to The Associated Press on condition of anonymity.

The FBI and others are trying to establish whether the attack Friday was an act of terrorism and whether the gunman, 2nd Lt. Mohammed Alshamrani, 21, of the Royal Saudi Air Force, acted alone. Alshamrani was a flight student at Pensacola, where members of foreign militaries are routinely trained by the U.S.

FBI agents trying to determine the purpose of his New York visit are attempting to locate and question anyone who may have dealt with him, the official said.

Earlier in the week of the shooting, Alshamrani hosted a dinner party where he and three others watched videos of mass shootings, another U.S. official told the AP Saturday.

The U.S. has sought the assistance of Saudi officials as they try to piece together information about the gunman and his motive.

Alshamrani opened fire inside a classroom at the base, killing three people and wounding two sheriff's deputies, one in the arm and one in the knee, before one of the deputies killed him. Eight others were also hurt. Both deputies were expected to survive.

The official who spoke Saturday said one of the three students who attended the dinner party hosted by the attacker recorded video outside the classroom building while the shooting was taking place. Two other Saudi students watched from a car, the official said.

Ten Saudi students were being held on the base Saturday as part of the investigation, the official said.

President Donald Trump declined to say whether the shooting was terrorism-related but said Saturday that he would review policies governing foreign military training in the U.S.

The U.S. has long had a robust training program for Saudis, providing assistance in the U.S. and in the kingdom. More than 850 Saudis are in the U.S. for various training activities. They are among more than 5,000 foreign students from 153 countries in the U.S. going through military training.

“This has been done for many decades,” Trump said. “I guess we're going to have to look into the whole procedure. We'll start that immediately."