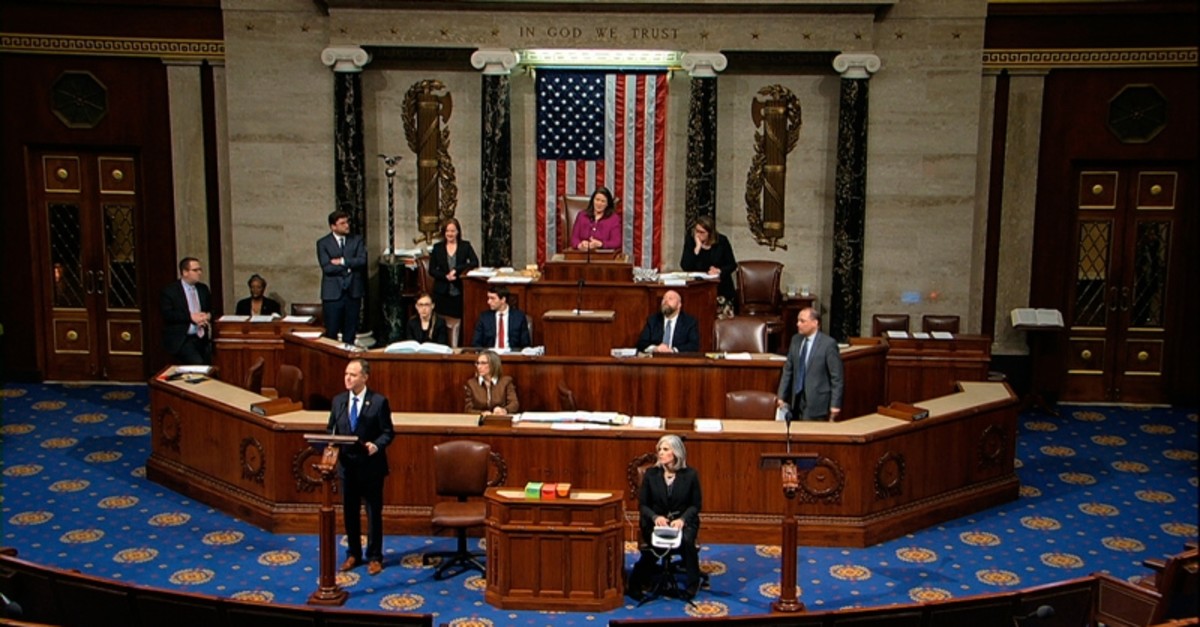 House Intelligence Committee Chairman Adam Schiff, D-Calif., speaks as the House of Representatives debates the articles of impeachment against President Donald Trump at the Capitol in Washington, Wednesday, Dec. 18, 2019. (House Television via AP)
by Associated Press Dec 19, 2019 2:11 am

An incredulous and defiant President Donald Trump stared down Wednesday's impending impeachment votes as he has every obstacle in his presidency: broadcasting his grievances by tweet.

The White House insisted Trump would be busy working rather than focused on the proceedings in the House, but Trump spent his morning tweeting and retweeting, expressing fury and disbelief.

"Can you believe that I will be impeached today by the Radical Left, Do Nothing Democrats, AND I DID NOTHING WRONG!," Trump wrote in one of 45 tweets posted before noon. He asked his followers to "Say a PRAYER!"

As members of the House debated the articles of impeachment, Trump's urgency appeared to escalate as he switched to all capital letters: "SUCH ATROCIOUS LIES BY THE RADICAL LEFT, DO NOTHING DEMOCRATS. THIS IS AN ASSAULT ON AMERICA, AND AN ASSAULT ON THE REPUBLICAN PARTY!!!!" he wrote.

For Trump, it was an acknowledgment of the inevitable: That he will become just the third president in U.S. history to be impeached by the House of Representatives. While he and White House officials have tried to brush off the significance — noting there is little chance he will be convicted by the Republican-controlled Senate and removed from office — allies nonetheless acknowledge that Trump has indeed been angry over the stain the episode will leave on his legacy.

Trump is facing two articles of impeachment: The first charges him with abuse of power for allegedly pressuring the president of Ukraine to investigate his Democratic rivals while crucial U.S. security aid was being withheld. The second charges him with obstruction of Congress for stonewalling investigative efforts.

While Trump had little on his public schedule as the debate was taking place Wednesday, he was planning his own counter-programming in the evening, holding what was expected to be a highly charged rally in the battleground state of Michigan.

Otherwise, White House Press Secretary Stephanie Grisham said, Trump will be "working all day" as the House takes up the two articles of impeachment.

"He will be briefed by staff throughout that day, and could catch some of the proceedings between meetings," Grisham said.

As the debate raged on, Trump aides, including White House counselor Kellyanne Conway, fanned out across Capitol Hill to bolster the president's message that impeachment is helping Republicans. Vice President Mike Pence headed to Michigan early for a daylong bus tour before joining Trump at his Battle Creek rally. He called the expected votes a "disgrace" and said he marveled at the president's resilience and his "determination to go forward."

He also accused Democrats of "trying to impeach this president because they can't defeat" him, predicting that Trump would once again carry the state, in part because of the energy generated by impeachment,

Trump's campaign has experienced a surge in contributions and volunteers during the proceedings and was hoping to raise another $2 million Wednesday ahead of the votes.

Trump, for his part, had plenty to say via tweet, declaring that Democratic House Speaker Nancy Pelosi "Will go down in history as worst Speaker." He also generously retweeted allies' comments from his favorite morning show, "Fox & Friends," as they sought to reassure conservative voters that Trump remains in good spirits despite the looming vote.

On Tuesday, Trump released a fiery letter to Pelosi denouncing his impeachment as "an unprecedented and unconstitutional abuse of power by Democrats."

"You view democracy as your enemy!" he railed, claiming at one point that, "More due process was afforded to those accused in the Salem Witch Trials." A senior administration official, speaking on condition of anonymity to discuss internal deliberations, said the letter had been largely dictated by Trump, with the White House Counsel's Office given the chance to review it before it was released.

Rep. Kevin McCarthy, the House minority leader, and Rep. John Ratcliffe, R-Texas, said they were among a group of GOP lawmakers who met with Trump at the White House on Tuesday evening to talk strategy about Wednesday's House session and the likely Senate trial in January.

McCarthy insisted that Trump remains focused on moving his agenda, even though his legacy will forever include impeachment.

"Anybody else, this would be traumatic for them," said McCarthy. He noted that Trump in recent days has hosted multiple White House holiday parties and will be rallying Wednesday evening. "I've never seen a man so strong. ... He is focused on what the American people need."

Grisham told "Fox & Friends" that Trump will have plenty to say about the vote at his evening campaign rally in Battle Creek, but insisted that the president has been a voice of calm for top administration officials, despite his public fury.

"He is such a focused president," Grisham said. "I must tell you that, while he's frustrated, as evidenced by that letter yesterday, he is also so focused and he is leading our White House and keeping us calm and telling us, 'That's OK, we're going to move forward, we're focused, this is going to take us through to 2020."