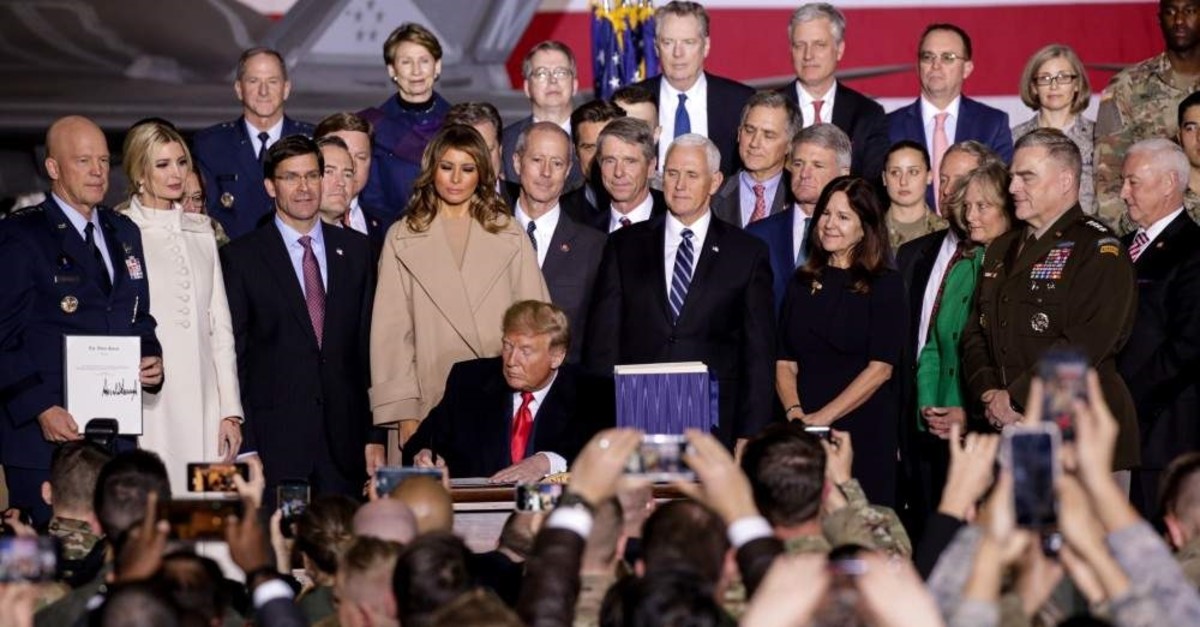 Encircled by top officials of his administration, US President Donald Trump signs $738 billion 2020 National Defense Authorization Act (NDAA) at Joint Andrews Base in Maryland, on Dec. 20, 2019. (AA Photo)
by Compiled from Wire Services Dec 21, 2019 11:54 am

U.S. President Donald Trump signed off Friday the country's largest-ever defense budget allowing for the creation of a space force as well as nearly $1.4 trillion in spending added that will keep the government funded through Sept. 30, dodging the possibility of a shutdown ahead of what's expected to be a contentious election season.

White House Deputy Press Secretary Judd Deere said Trump signed the government funding legislation aboard Air Force One as he traveled to his Mar-a-Lago resort, where he will be celebrating Christmas and New Year's.

The spending measures, which will add roughly $400 billion to the deficit over the next 10 years, includes money for the president's U.S.-Mexico border fence, pay raises for the military and civilian federal workers, and federal funding for election security grants.

The massive spending measures were made public earlier this week and headed off a repeat of last year's end-of-the-year impasse that led to a 35-day partial government shutdown. That showdown stemmed from Trump's demand that Congress sign off on nearly $6 billion in funding for the border wall.

Hundreds of thousands of government workers were furloughed or forced to work without pay during the shutdown. Trump skipped his holiday vacation and remained in Washington through the impasse.

Trump signed the bill at a ceremony at Joint Base Andrews, Maryland with attendees of top state officials and military chiefs, including Vice President Mike Pence and Defense Secretary Mark Esper. The bill cleared Congress with overwhelming bipartisan support; 86-8 in the Senate and 377-48 in the House of Representatives.

The defense bill was packed with additional measures aimed at Turkey that include a prohibition on transferring fifth-generation F-35 joint strike fighters, or its parts, to Turkey due to its purchase of the Russian S-400 anti-air missile system, and calls for Trump to implement sanctions on Turkey under the Countering America's Adversaries Through Sanctions Act (CAATSA). It further provides the Pentagon with $440 million to purchase the F-35 aircraft initially bought by Turkey.

Turkey's acquisition of the advanced Russian air-defense system prompted the Trump administration to remove Turkey from the F-35 program in July. The U.S. maintains that the system could be used by Russia to covertly obtain classified details on the jet and is incompatible with NATO systems. Turkey, however, counters that the S-400 would not be integrated into NATO systems and would not pose a threat to the alliance.

Turkey criticized the U.S. for threats to remove it from the F-35 program due to its purchase of the Russian S-400 system. "We remind once more that the language of threats and sanctions will never dissuade Turkey from resolutely taking steps to ensure its national security," the country's Foreign Ministry said in a statement.

The defense bill further lifts a longstanding U.S. arms embargo on the Greek Cypriot administration of southern Cyprus, however, it is on the condition that Nicosia works with U.S. authorities on money laundering and take necessary steps to prevent Russian military ships from using the island for maintenance and refueling.

The annual military aid allocated to armed groups in Syria under the pretext of fighting Daesh, such as PKK terrorist group's Syrian offshoot YPG as part of the Syrian Democratic Forces (SDF), was not disclosed in this year's budget. Some $500 million was being allocated to such groups in the previous years.

The bill also includes U.S. sanctions against companies building a Russian natural gas pipeline to Germany that Congress fears will give the Kremlin dangerous leverage over European allies. They target companies building the nearly $11 billion Nord Stream 2 pipeline under the Baltic Sea with the aim of doubling deliveries of Russian natural gas to Europe's leading economy, Germany.

U.S. lawmakers have warned that the pipeline would enrich a hostile Russian government and vastly increase President Vladimir Putin's influence in Europe at a time of heightened tension across the continent.

Both houses of Congress overwhelmingly approved the sanctions, with the Senate voting Tuesday to send the measure to Trump's desk.

Trump, who has been accused by Democratic opponents of being soft on Putin, had little choice but to give his approval.

The sanctions were inserted into a much wider $738 billion annual Pentagon funding bill and, given the level of congressional support, a veto would likely have been overturned.

The U.S. measures have angered Moscow and the European Union, which says it should be able to decide its own energy policies.

The German-Russian Chamber of Commerce insisted last week that the pipeline was important for energy security and urged retaliatory sanctions against the United States if the bill passes.

The U.S. sanctions target pipe-laying vessels for Nord Stream 2 and TurkStream, a Russia-Turkey pipeline crossing the Black Sea, and include asset freezes and revocations of U.S. visas for the contractors.

One major contractor that could be hit is Allseas, which has been hired by Russia's state-owned energy giant Gazprom to build the offshore section. Following the act's signing, the Swiss-based company said in a statement it had "suspended its Nord Stream 2 pipelay activities."

The power of Gazprom, which is closely integrated with the Russian state, is at the center of concerns about the pipeline in the United States, and also in eastern and central European countries. Senator Ted Cruz, a Republican ally of Trump, said that halting Nord Stream 2 should be a major security priority for the United States and Europe alike. "It's far better for Europe to be relying on energy from the United States than to be fueling Putin and have his dependents be subjected to economic blackmail," he told the Senate last week.

However, Senator Rand Paul, another Republican, voted against the bill, objecting to its bid to "sanction NATO allies and potentially American energy companies."

Nord Stream 2 would allow Russia to bypass Ukraine and Poland to deliver gas under the Baltic Sea to Germany. Gazprom is taking on half of the project's planned costs and the rest is divided between five European energy companies: Austria's OMV, Germany's Uniper and Wintershall, Royal Dutch Shell and France's Engie.

The Trump administration, like the Obama administration before it, opposes the project on the grounds it would strengthen Russian President Vladimir Putin's economic and political grip over Europe. Russia has cut the delivery of fuel to Ukraine and parts of Europe in winter during pricing disputes.

"We have a degree of consistency, over a decade of opposing this issue, across presidential administrations," one of the U.S. officials said.

The United States has become the world's top oil and gas producer in recent years and is aggressively trying to sell the products abroad. The Trump administration has touted U.S. liquefied natural gas as "freedom gas" that gives Europe an alternative to Russian supply. Washington says that Nord Stream 2 would also likely deprive Ukraine of billions of dollars in gas transit fees. Germany says it needs the gas as it weans itself off coal and nuclear power.

Space Force established as part of the NDAA

The legislation will create the Department of Defense's sixth force, a coequal of the five existing forces – the Army, Navy, Air Force, Marines and Coast Guard. "Our reliance on space-based capabilities has grown dramatically, and today outer space has evolved into a war-fighting domain of its own," said Secretary of Defense Mark Esper. "Maintaining American dominance in that domain is now the mission of the United States Space Force."

It will have its own uniform, shoulder patches and even, eventually, its own song, just like the other branches. "The U.S. Space Force will protect America's national interests by its singular focus on space. The United States has the best space acumen in the world," Barrett said. A staff of 16,000 would make it much smaller than the other forces, but Barrett said the technology-centric nature of the work requires fewer people. "It's a different sort of portfolio than what we might be thinking of when we generally think about warfighting machines," she said.

Leading the Space Force will be Air Force General Jay Raymond, who currently runs SpaceCom. "With the establishment of the United States Space Force, we're elevating space commensurate with its importance to our national security and the security of our allies and our partners," said Raymond.