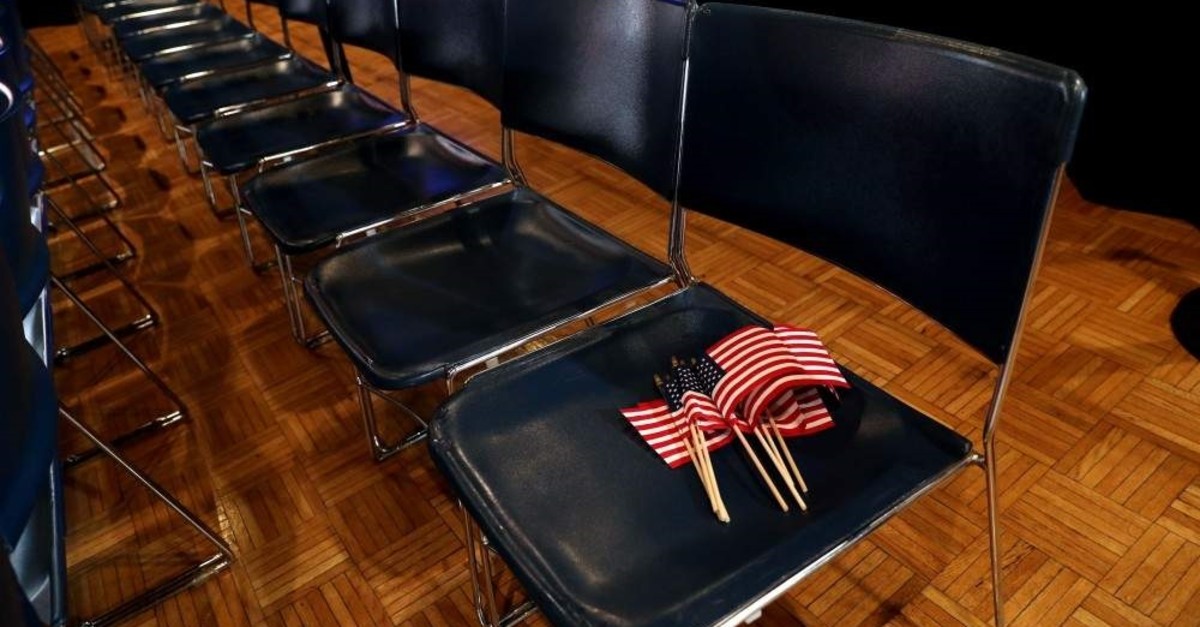 Flags are left on a seat before a rally by former Vice President Joe Biden in Des Moines, Iowa, U.S., Feb. 3, 2020. (Reuters Photo)
by Compiled from Wire Services Feb 04, 2020 10:27 am
Problems with a mobile app appeared to force a delay in reporting the results of the Iowa caucuses Monday, leaving the campaigns, voters and the media in election limbo and pressing for an explanation.

An Iowa Democratic Party official pointed to "inconsistencies in the reporting" of the results and said "quality control" efforts were holding up the results. The official stressed that delay was not caused by a "hack or an intrusion."

But other caucus organizers put the blame squarely on a new technology used to report results from some 1,700 caucus meetings across the state. Glitches with a new mobile app caused confusion, they said, and some caucus organizers were forced to call in results for the state party to record manually, introducing human error and delays.

Des Moines County Democratic Chair Tom Courtney said he heard that in precincts across his county, including his own, the mobile app was "a mess."

Precinct leaders were instead phoning in their results to the Democratic Party headquarters, and "they weren't answering the phones," Courtney said.

Data released by the Sanders campaign, which said it represents results from nearly 40% of precincts in Iowa, shows the leftist senator garnering 28.62% of the vote, followed by moderate Buttigieg on 25.71%.

"We recognize that this does not replace the full data from the Iowa Democratic Party, but we believe firmly that our supporters worked too hard for too long to have the results of that work delayed," Sanders adviser Jeff Weaver said.

The data collected by Sanders campaign volunteers showed progressive Senator Elizabeth Warren in third place, with 18.42% of the vote, with former vice president Joe Biden slipping to fourth place on 15.08%.

The only other candidate polling above 10% was Amy Klobuchar, on 10.93.

The technical problems were an embarrassment for a state that has long sought to protect its prized status as the first contest in presidential primaries and the nation's first vetter of candidates. The delay was certain to become fodder for critics who argued that the caucuses – party meetings that can be chaotic, crowded and messy – are antiquated and exclusionary.

The Iowa Democratic Party pressed forward with the new reporting system amid warnings about the possibility of hacking and glitches. Party officials said they took numerous security precautions and maintained that any errors would be easily correctable because of backups and a paper trail.

But the apps were barely working Monday night, according to a person involved in processing the data who requested anonymity to discuss the party's internal system. That forced party aides to record results from the precincts via phone and enter them manually into a database. Officials were left using photos of results to validate results and ensure accuracy.

Jonathan Green, who chaired a precinct in Lone Tree, said that when he tried to put the results into the reporting app, he kept getting a confusing error message: "Unknown protocol. The address specifies a protocol (e.g., "wxyz:??".) the browser does not recognize, so the browser cannot properly connect to the site."

He said he ultimately gave up and tried to call in the results to the party. Like others, he was put on hold for an extended period of time. In the end, it took hours to report results from his small site, he said.

The slowdown was exacerbated by the fact that the party was for the first time attempting to report three different sets of data – an initial headcount of each candidates' support, a count after supporters had realigned, and the state delegate winners.

"We found inconsistencies in the reporting of three sets of results," the party said in a statement. "This is simply a reporting issue, the app did not go down and this is not a hack or an intrusion. The underlying data and paper trail is sound and will simply take time to further report the results."

President Donald Trump's campaign quickly seized on the issue to sow doubt about the validity of the results.

Richard L. Hasen, an election expert and professor at University of California, Irvine School of Law, cautioned against jumping to conclusions about the integrity of the election.

"Most of the time when there is a problem with an election it turns out to be the result of administrative incompetence rather than someone cheating or some outside interference," Hasen said.

Deploying new technology this close to an election is always a risky proposition, said Lawrence Norden, an elections expert with The Brennan Center for Justice at NYU School of Law. Norden said it's akin to a major retailer using new cash registers for the first time on Black Friday.

"To roll out a new technology without really testing it and making it available as early as possible and giving folks the opportunity to challenge it and work out all the bugs is a high-stakes decision which I think is proving to be problematic today," Norden said.

Norden said party officials were wise to slow down the reporting to ensure accurate results, given concerns of another round of election interference by Russia or other hostile governments seeking to undermine U.S. democracy.

"People aren't going to remember in two weeks that these results were late, but you can bet if the results changed dramatically they would," Norden said. "Those of us who work in the election space support accuracy over speed."

Ruth Thompson, who chaired a precinct at Lincoln High School in Des Moines, said she did not use the app to report results because organizers had problems trying to download and test it.

"We just came to a consensus that nobody was happy with the app," she said. She also did not try to report her site's results over the phone after hearing reports of long delays in answering the line at state headquarters, she said.

Instead, veteran caucusgoers at her site used calculators to compute the delegate allocation and then texted a photo of the results to Polk County Democratic Party officials, who drove it to state party headquarters.

Thompson said the delays in results were unfortunate because the process went "remarkably smoothly" in other ways.
RELATED TOPICS