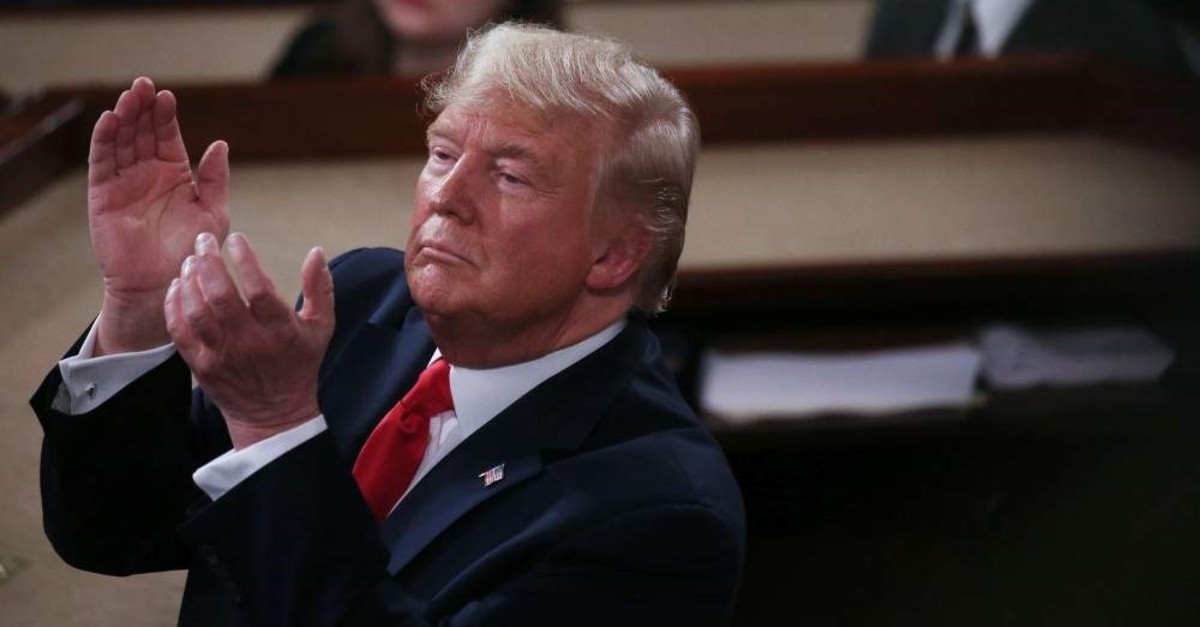 U.S. President Donald Trump delivers his State of the Union address to a joint session of Congress on Capitol Hill in Washington, Tuesday, Feb. 4, 2020. (AFP Photo/Getty Images)
by Compiled from Wire Services Feb 06, 2020 12:28 am

With the final gavel banging down Wednesday on impeachment, U.S. President Donald Trump barreled ahead in his reelection fight with a united Republican Party behind him and emboldened by reassuring poll numbers and chaos in the Democratic race to replace him.

On largely party-line votes, the Republican-controlled Senate cleared Trump on Wednesday of charges of abuse of power and obstruction of Congress, keeping him in office and setting up a nine-month battle for the White House against the eventual Democratic presidential nominee.
Senate Republicans voted to acquit Trump of abuse of power for pressing Ukraine to investigate political rival Joe Biden, a contender for the Democratic presidential nomination, and of obstructing a congressional investigation of the matter. Senator Mitt Romney, the 2012 Republican presidential nominee, was the only Republican to join Democrats, voting to convict on the abuse charge but not on obstruction. No Democrat voted to acquit. The acquittal was Trump's biggest victory yet over his Democratic foes in Congress, who complained bitterly about Senate Republicans' refusal to call witnesses or seek new evidence at the trial.
One day after Trump avoided talk of impeachment in his State of the Union address and argued that he had delivered on his 2016 campaign promises, the president already was moving to use impeachment as a 2020 rallying cry. Trump tweeted after the vote that he would mark his acquittal with a statement at noon Thursday to “discuss our Country’s VICTORY on the Impeachment Hoax!” And the president's supporters were being invited to join him in an East Room victory lap.

Trump quickly celebrated the Senate vote on Twitter, announcing his public statement to discuss what he called "VICTORY on the Impeachment Hoax!" and posting a video joking he would remain president forever. Ivanka Trump, the president's daughter and a senior White House aide, said in a post: "This factional fever and incoherent, ill-conceived process has finally ended and the President has rightfully been acquitted. It is time for our Country to move forward. Together.”

The nation's first presidential nominating contest, the Iowa caucuses, handed more good news to Trump. A tabulating mishap threw the Democrats into chaos, depriving any candidate of a clear victory and allowing Trump to paint the Democrats as incompetent and corrupt.

Taking their cues from Senate Majority Leader Mitch McConnell, with whom Trump has a respectful, if not particularly close, relationship, GOP senators fell in line to block new witnesses and documents in the trial.

Throughout the impeachment process, Trump drew satisfaction as Republican senators, many of whom opposed his long-shot candidacy and still dismiss him in private, overwhelmingly defended him and defied convention, tradition and public opinion polling in the process. Scott Jennings, a longtime Republican political adviser, said the Senate impeachment trial strengthened Trump’s hand within the party, especially with his core conservative base.

“It actually endears him to his most committed supporters. If Trump is a disrupter, it makes all the sense in the world for the insiders to try to get rid of him. It hands Trump a real messaging point,” Jennings said. “I see no weaknesses in Trump now.”

Trump has benefited from a new class of Republicans in Congress who have proved to be more partisan than their predecessors. Party members also know that Trump rains retribution on those who cross him. For all of Trump’s talk about how Democrats stick together, he’s got the Republicans in his fist.