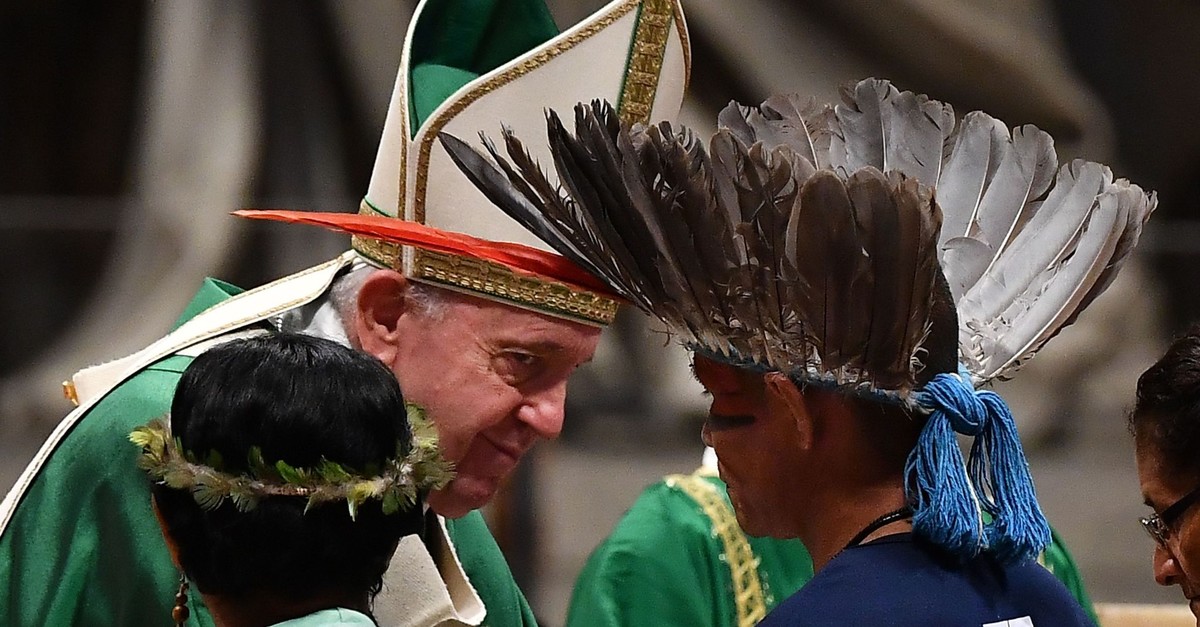 On Wednesday, Pope Francis ruled against married men becoming priests in the Amazon, yet pleaded for social justice and environmental respect for the Amazon basin.

In a highly anticipated text, Francis urged Catholics to "feel outraged" over the exploitation of indigenous people and destruction of land devastated by illegal mining and deforestation.

But there was no mention of priestly marriage, a controversial suggestion made by Amazon bishops last October as a way to increase the number of priests who could perform Mass in remote areas.

Instead, the pope argued for more missionaries and for women and lay people to take larger roles in the region. He also urged more training for priests to better interact with Amazonian cultures.

Francis has weighed in before on the hotly debated question of whether to allow "viri probati" – married "men of proven virtue" – to join the priesthood in remote locations.

In January last year, he said he did not believe that optional celibacy should be allowed but conceded "some possibilities for far-flung places," a statement that opened the door to speculation that he might make an exception for the Amazon.

Among other proposals in a final document, the bishops suggested ordaining "suitable and esteemed men of the community" who had "a legitimately constituted and stable family."

But the suggestion aroused fierce opposition from traditionalists within the Church, concerned that exceptions could pave the way to the abolition of priest celibacy globally.

Francis' text released Wednesday was a so-called apostolic exhortation in response to the bishops' document.

Francis has made his name as a defender of the marginalized – whether the poor, migrants or prisoners – and his Amazon text focused on the local people's "history of suffering."

Saying the Amazon's ecological problems should not be separated from social ones, he highlighted how marginalized indigenous people were forced out of their homes by illegal deforestation and mining.

Those people were now living on the outskirts of cities marked by "an increase of xenophobia, sexual exploitation and human trafficking," he wrote.

"We need to feel outraged, as Moses did, as Jesus did, as God does in the face of injustice. It is not good for us to become inured to evil," wrote the pope.

"The businesses, national or international, which harm the Amazon and fail to respect the right of the original peoples to the land and its boundaries, and to self-determination and prior consent, should be called for what they are: injustice and crime."

However, Francis acknowledged the challenges faced by the Church in remote areas of the Amazon, urging bishops to send out more young missionaries, in keeping with his status as the first pope from the Jesuit order – famous for its missionary work.

The pope stressed the need for ministers who could "understand Amazonian sensibilities and cultures from within" and highlighted the potential role for nuns as well as laywomen and men.

"It is not simply a question of facilitating a greater presence of ordained ministers who can celebrate the Eucharist," he wrote.

Among those he hinted could take a bigger role in the Amazon were "permanent deacons" – men who serve as ministers in the Church but are not priests and so can be married.