Protest at Belgian Embassy over expulsion of lawmaker 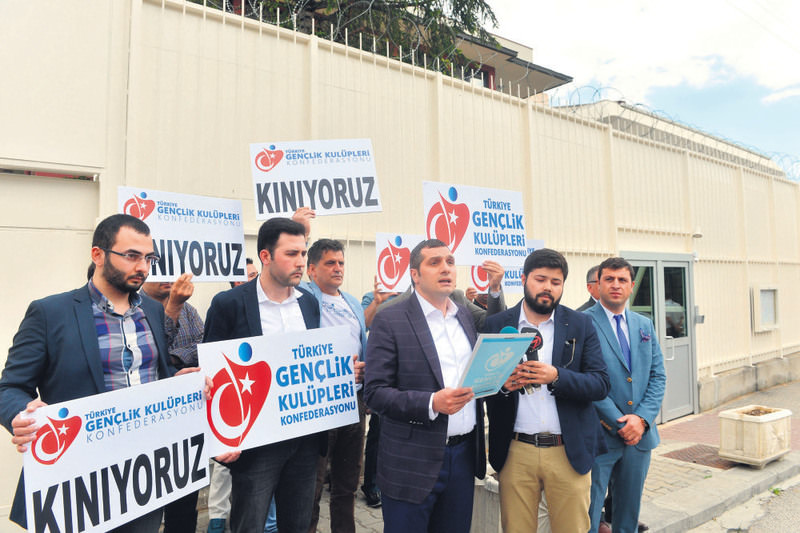 by Daily Sabah Jun 02, 2015 12:00 am
A group of protesters rallied outside the Belgian embassy in Ankara yesterday over the expulsion of a Belgian deputy of Turkish origin from her party. Mahinur Özdemir from the Democratic Humanist Center (CDH) was expelled from her party over her refusal to recognize the mass deaths of Armenians under the Ottoman Empire as "genocide."

Protesters from the Confederation of Turkish Youth Clubs hung banners reading "We Condemn" on the walls of the embassy.

Speaking on behalf of the protesters, Bilal Okudan said the expulsion was an undemocratic decision and "a plot by the Armenian lobby." He said the move meant to ignore 220,000 Turks living in Belgium. He claimed that the stance of the CDH would further alienate Turks from integration efforts in Europe. "This decision is against the law and conscience. We view it as a message to the Turkish people and this attack on the Turkish nation will not go without a response," he said.

The Turkish-Belgian politician, who is the first headscarf-wearing politician to be elected to the Belgian assembly, will continue serving as an independent deputy.

Armenia claims up to 1.5 million Armenians were killed in an act of genocide by the Ottoman Empire in 1915 during World War I. Turkey accepts the mass deaths of Armenians during their forced deportation during the war, but claims the death toll was much lower and attributes the mass deaths to disease and isolated cases of attacks. Ankara has also urged Armenia to let historians handle the matter, though Armenia demands recognition of the incidents as "genocide" in order to advance relations between the two neighboring countries.

Belgium recognizes the deaths of Armenians as "genocide," but the denial of genocide does not constitute a crime, as is the case in some other European countries, including Greece and Switzerland.
RELATED TOPICS