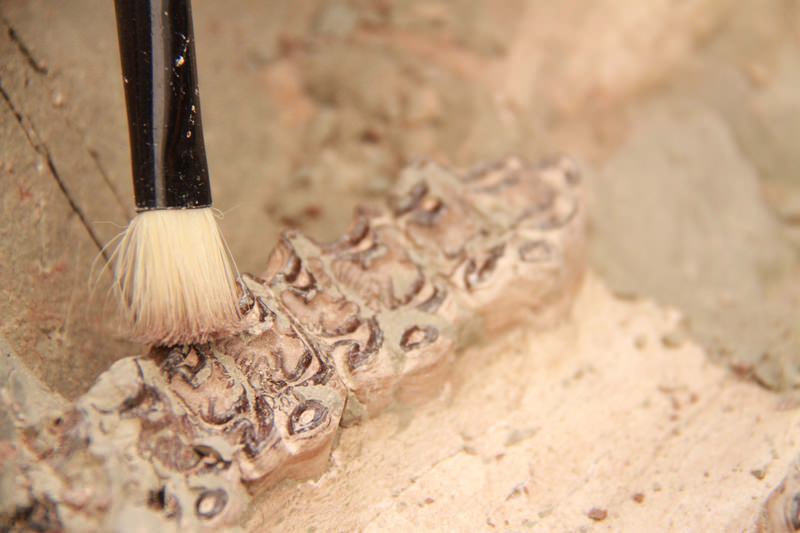 | AA Photo
by Daily Sabah Aug 20, 2015 12:00 am
About 3,300 fossils, some of which are as old as eight million years, have been found in excavations carried out in the heart of Turkey in Ankara 's 'Çankırı Vertebrate Fossil Locality' within the last 18 years.

Led by Ankara University lecturer of the Faculty of Languages, History and Geography, Department of Anthropology Prof. Dr. Ayla Sevim Erol and 25 university students from different universities across Turkey were actively taking part in the excavations.

Among the remains and fossils found in the excavations conducted since 1997, eight million year-old vertebrate fossils were found, stated Prof. Erol.

"We are digging with fine point needle picks, dentist's probes, tongue depressors and small soft-bristled brushes as not to damage the fossils and remains; we are attempting to do the impossible," said the professor.

Pointing out that fossils of 20 species including elephant, rhinoceros, horse, pig, giraffe, deer, sheep and saber-toothed tiger remains were found so far, Prof. Erol said that it is highly likely that new species will be found in the follow-up excavations which will continue until mid-September.

The professor added that with these excavations they are hoping to 'get to the bottom of' and shed light on Anatolia's fascinating history.