12 killed in Ankara after bus crashes into bus stop 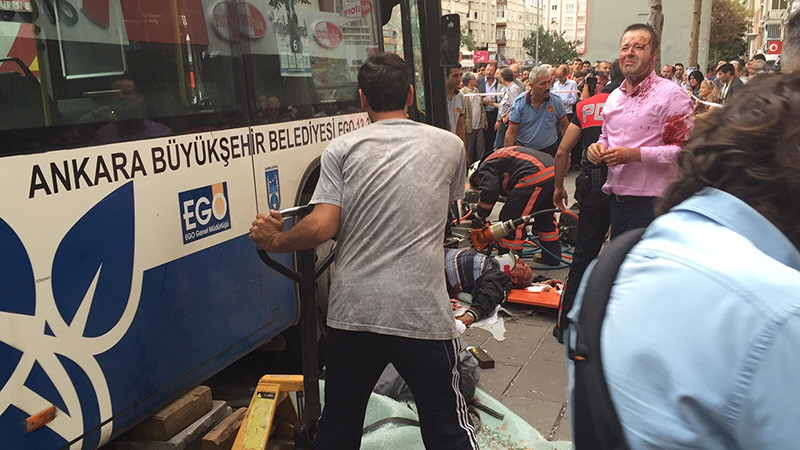 | AA Photo
by Daily Sabah with AA
Oct 01, 2015 12:00 am
Twelve people were killed and 13 others were injured when a bus crashed into a bus stop in the capital Ankara on Thursday.

The accident in the Dikimevi district was caused by a public bus driver losing control of the vehicle, Ankara Governor Mehmet Kılıçlar told reporters. Turkish media reported the accident was the result of a brake failure.

The governor said the bus first crashed into the bus stop and came to a halt after running over victims and dragging them meters away from the bus stop. The bus also hit eight cars on the street before it came to a halt. The bus driver escaped uninjured from the accident and was being interrogated by police as the news went to print. Governor Kılıçlar said the driver had not suffered any kind of heart attack as was earlier speculated.

The initial death toll was 10 but two of the injured succumbed to their wounds at the hospitals they were taken to.

The first photos from the scene showed firefighters sawing off parts of the crashed bus to rescue an unconscious man trapped underneath and survivors with blood splattered all over their bodies.

The accident is the deadliest involving a bus in recent memory. In July, seven people were killed in a bus crash in the northern city of Bolu.

Traffic accidents are common in Turkey despite measures and awareness campaigns against reckless driving. Last year, more than 3,500 people were killed in road accidents.