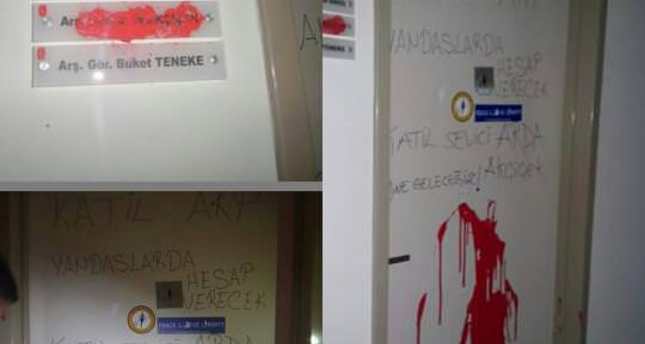 by Emre Başaran
Oct 20, 2015 12:00 am
Scores of academicians and students condemned the threatening attack against Hacettepe University Research Assistant Arda Akçiçek, whose room was vandalized by leftist groups on October 14. In the petition started on change.org Tuesday, academicians and students from many universities showed their support and solidarity for Akçiçek, who was labeled as an "ISIS supporter" by leftist groups in the university.

"We condemn the attack on our fellow colleague!

We are deeply saddened by the threatening attack against our colleague working in Hacettepe University's Social Sciences Institute, Research Assistant Arda Akçiçek. We are deeply sorry about this incident that targeted him," the fellow academicians said in the statement.

"We believe that this attack is a manifestation of the tyranny of certain ideological groups over the majority in universities around Turkey," they added.

"The notion of 'freedom' which is continuously used by the groups who conduct the attacks cannot be used to legitimize the pressure put on academicians and students of other ideological views. Freedom is not a tool of these violent groups; instead, it is one of the most fundamental values of the institutions we are working for," Akçiçek's friends and colleagues stated, adding that they are against every attack and discrimination targeted at academicians and intellectuals.

"We, who have signed the petition, show our solidarity and support for our friend Arda Akçiçek and we hereby declare our will that universities not be places where hate crimes can be committed for the sake of certain ideologies," Akçiçek's colleagues further added in the statement.

A leftist group who call themselves "Öğrenci Kolektifleri" (Student Collectives) vandalized the room of Ankara's Hacettepe University Academician Arda Akçiçek by writing threat notes on the door and marking it with red paint last Wednesday.

Akçiçek's nameplate was scratched out and painted red, while his room's door was splattered with red paint in a way that resembled blood. "We will come back," the vandals wrote on the door and posted photos of their "work" on social media along with other threatening messages.

Disrupting the peace in the university, the group received a lot of criticism on social media.

Various reports suggest that Öğrenci Kolektifleri was founded by a group of students in 2006 as an "advocate of student rights, free and equal education." The group is reported to have branches across 30 universities in Turkey.
Last Update: Oct 21, 2015 1:01 am