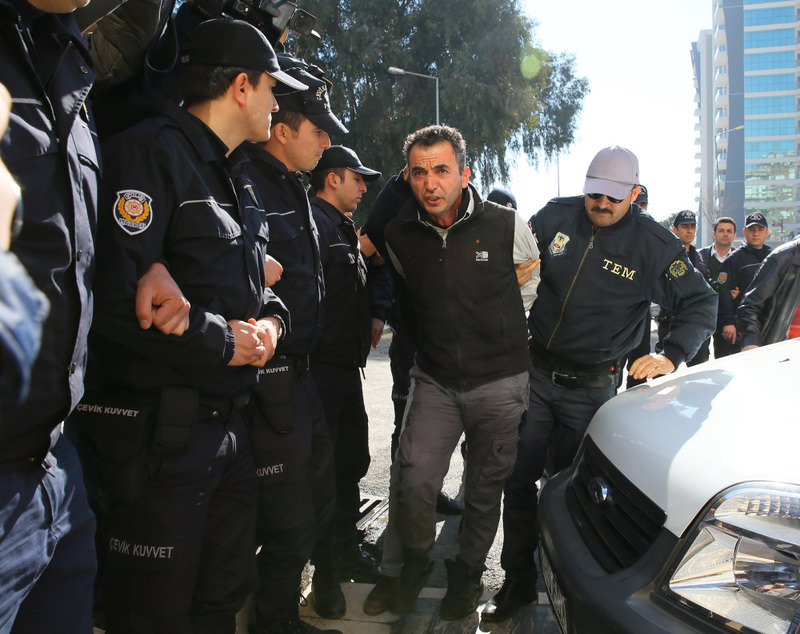 Suspect u0130smail Akkol being accompanied by policemen to a police station in the city of Aydu0131n. Akkol and fellow DHKP-C member Fadik Adu0131yaman were captured at a bus station.
by Yusuf Ziya Durmuş Feb 04, 2016 12:00 am

Two suspected members of the DHKP-C terrorist organization captured on Tuesday in western Turkey were planning to conduct an attack in Ankara, media reports say. The suspects were released by Greece where they were detained last year and were not extradited to Turkey despite requests from Turkish authorities

The capital, Ankara, was in the crosshairs of two suspected members of the Revolutionary People's Liberation Party-Front (DHKP-C), a terrorist organization, according to media reports. İsmail Akkol and Fadik Adıyaman were captured along with explosives and weapons in the western city of Aydın on Tuesday. Akkol and Adıyaman were among DHKP-C members who Greece – the country where they had been detained – refused to extradite to Turkey despite authorities' pleas. The duo posing as a couple when they were caught, were brought to a courthouse in Aydın yesterday for interrogation. Police sources said they sneaked into Turkey illegally by boat from Greece.

Authorities said the two suspects were in possession of a rocket launcher and rocket ammunition, three hand grenades, automatic weapons and "a white powder" that was likely a form of explosive. Police also detained a woman whose ID was used by Adıyaman when she was caught.

Akkol was among three suspects wanted for the 1996 murder of prominent businessman Özdemir Sabancı and two of his employees in Istanbul on behalf of the terrorist organization. Akkol traveled to Greece after stays in Belgium and Germany, according to intelligence reports. In 2014, Greek police captured him and four other DHKP-C members in Athens. After a trial in which he sought political asylum in Greece, Akkol was released in 2015, while the Greek judiciary rejected Turkey's extradition demand. Likewise, Adıyaman was captured along with six others in Athens in June 2015. She was also released after a trial, and Turkey's extradition request was turned down. Adıyaman, who arrived in Greece in 2006, was reportedly in charge of training DHKP-C militants in Greece's Lavrion refugee camp. Adıyaman was wanted for an attack on a branch of the ruling Justice and Development Party (AK Party). The AK Party was among the targets of the terrorist organization in 2013. Group members had conducted non-lethal rocket attacks on AK Party headquarters and the Justice Ministry in Ankara that year. One of the militants had fled to Greece, while the other suspect was captured.

Greece, along with Syria, which is regarded as the birthplace of the group, are among countries where members of the terrorist organization took shelter after a string of crackdowns by security forces in the past. Lavrion, located on Greece's Aegean coast, houses a refugee camp that is largely occupied by terrorists who use it as a training camp and coordination center for their activities. DHKP-C members often seek asylum in Europe, claiming they have been persecuted for their political views in Turkey. The group is designated as a terrorist organization both by Turkey and the United States, which is also among its targets. A DHKP-C militant blew himself up at the entrance of the United States Embassy in Ankara in 2013, killing a Turkish security guard.

The country, which had strained ties with neighboring Turkey, changed its much-criticized policy of tolerance for supporters of the terrorist organization, and a number of militants were arrested in 2014 in several operations that also nabbed high-ranking members of the group. The move was seen as improving counterterrorism cooperation between Turkey and Greece, although the refusal of Greek courts to extradite several suspects overshadowed the efforts.

Security forces were already on alert after intelligence services warned last month that several DHKP-C militants, including Akkol, would attempt to cross into Turkey from Greek islands near the country's Aegean coast.

Oya Aslan, a lawyer for two suspects, told reporters yesterday that Akkol may be acquitted in the murder of Özdemir Sabancı due to a statute of limitations as he was not handed down a final conviction. İsmail Akkol had accompanied Mustafa Duyar, another DHKP-C militant, in the murder of Sabancı, according to police reports. Duyar was killed in prison following his capture by police while Fehriye Erdal, the third suspect, disappeared after she was captured and released in Belgium. Aslan told reporters, inquiring about what her clients were planning to do in Turkey with the weapons in their possession, that it was "clear why they come to Turkey if you listen to their slogans." She was referring to the duo's slogans about Dilek Doğan and Berkin Elvan as they were brought to a police station. Doğan was killed last year during a police raid against the DHKP-C while Elvan died during a riot when a tear gas canister hit him in the head in 2014. Akkol and Adıyaman said they would "avenge" Doğan and Elvan. The DHKP-C was responsible for killing of Mehmet Selim Kiraz, a prosecutor who was investigating the possible negligence of police in the death of Elvan. Kiraz was killed in his room at an Istanbul courthouse last year after two militants took him hostage for several hours.
RELATED TOPICS