35 Somalis injured in Mogadishu blast arrive in Turkey for treatment 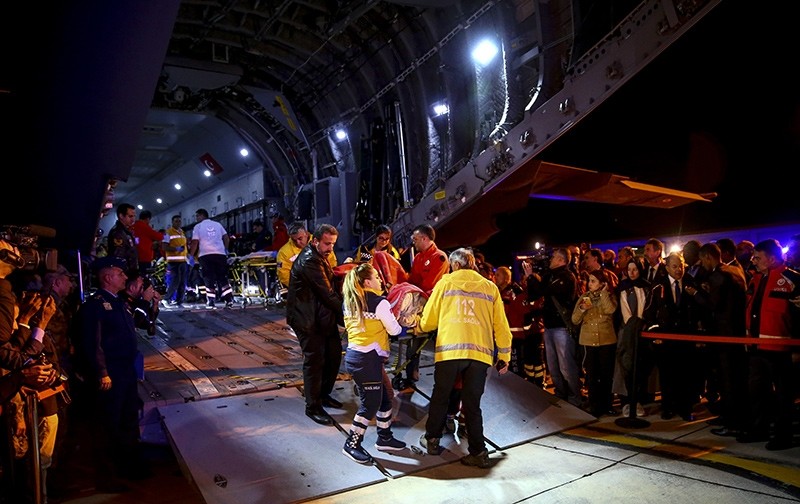 The blast at a busy road junction, blamed on Al-Shabaab terrorists, killed at least 276 people and wounded more than 300 others, according to Somali National News Agency, SONNA.

Speaking to reporters in Ankara, Recep Akdağ said that the patients, of whom 13 were severely injured, would be transferred to Polatlı, Numune and Gülhane hospitals.

The deputy PM added that currently 33 staff members of the Turkish Health Ministry were in Somalia and more patients could be transferred to Turkey if necessary.

Turkey's Health Minister Ahmet Demircan arrived in the Somali capital to oversee Turkish assistance, accompanied by 33 staff, including an emergency services medical team, the Turkish Embassy said in a statement.

A Turkish aircraft loaded with medical aid and emergency services workers, including 13 workers from the Turkish Red Crescent and the Disaster and Emergency Management Authority (AFAD), landed in Mogadishu Monday morning.

The Turkish humanitarian and medical aid was welcomed by the Somali government and people.

Somalia's President Mohamed Abdullahi Mohamed on Monday said during a visit to Aden Adde International Airport in Mogadishu that his government and Somali people would not forget Turkey's help.

At the Pan African Parliament (PAP)'s fifth meeting in Johannesburg, South African and Somali representatives thanked Turkey for its solidarity.

"We thank Turkey for its support and assistance after the explosion that killed more than 300 people Saturday," said Somali parliament member Abdulaziz Abdullah Mohammad. "We are losing hundreds of people every day because of the actions of terrorist groups in Africa."

Erdoğan condemned the blast, reaffirming Turkey's solidarity with the Somali people and its support for Somalia in standing against terrorism. The Turkish president sent a written message of condolences to his Somali counterpart Sunday.

Somalia desperately needs donated blood to treat the survivors of the truck bombing that occurred in the capital Mogadishu on Saturday that killed more than 300 people and injured at least 400 others, a minister said. The bombing was one of the worst such attacks in Somalia. Officials said it bore the hallmarks of al-Qaida-linked al-Shabab, but they have not claimed responsibility.

Information Minister Abdirahman Omar Osman said Somalia does not have a blood bank and that the limitations of its health care system were impeding the medical response. Countries, including Turkey and Qatar, are providing medical assistance.

Somalia has been mired in conflict since 1991, when clan warlords overthrew a dictator then turned on each other. As one of the poorest countries in Africa, it faces severe food insecurity and relies on foreign donors to support its institutions and basic services.