Festival On Wheels gearing up for 16th anniversary 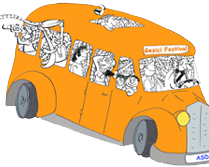 Turkey's annual traveling film festival of arthouse and indie productions, the Festival on Wheels, will hit the road in December for its 16th edition, its organizers announced on Tuesday.

The 16th Festival on Wheels will begin its journey on Dec. 3 in Ankara, its birthplace, where it will stay for four days before setting out to the eastern Black Sea city of Artvin for its weeklong main stint, from Dec. 10-16. The festival, organized annually by the Ankara Cinema Association (ASD), will this year also travel to Ordu, another city on Turkey's eastern Black Sea coast, where it will hold a three-day program from Dec. 17-19.
This year's festival will be held under the main theme "Coup!" The festival's main competition program, in which 10 films from various countries will run for the Golden Bull prize, will be held during the festival's Artvin stint. A selection of the most recent films by Turkish directors will be featured in the festival's "Turkish Cinema 2010" section, while a special program of short films by the Swedish duo Ola Simonsson and Johannes Stjärne Nilsson will also be offered.

Details of the program will be announced on Nov. 19 on the festival's website, www.festivalonwheels.org.
CIHAN
Last Update: Oct 27, 2010 2:39 pm
RELATED TOPICS