Malatya to welcome winter with laughs at inaugural film festival 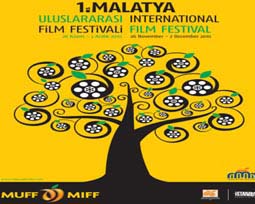 In late November, Malatya, the eastern Anatolian city famous for its apricot orchards, will welcome winter with a smile on its face, thanks to the city's first-ever film festival, a week-long celebration of humor on the big screen. The first Malatya International Film Festival (MUFF) will run from Nov. 26-Dec. 2 in this city that is said to be standing on “the western end of the East and the eastern end of the West.”


MUFF organizers announced the festival's program in a press conference in İstanbul on Tuesday. More than 100 titles in total, among them 66 feature films, will be offered in this year's festival -- a number fit for a festival in its early years.

"There are now around 10 film festivals held annually in various Turkish cities. However, in all of these events, [national] competition sections feature more or less the same selections [in a given year]. In the Malatya film festival, we wanted to break this habit and introduce a novelty with an official selection made up of comedy films," Ali Sönmez, a member of the festival's advisory committee, said during Tuesday's conference at the Point Hotel Barbaros.

The festival will open with "Badem Şekeri" (The Sugar Almonds), a 1963 Turkish comedy noted for its star-studded cast that brought together Türkan Şoray, Fatma Girik, Fikret Hakan, Öztürk Serengil and Hulusi Kentmen. Directed by Osman F. Seden, the film was also noted for being the first -- and only -- movie with Şoray and Girik in the title roles.

The week-long festival will feature two competition programs: one international competition for features and another for short films from Turkey. The festival is a first among its peers in Turkey as both its competitions are for films exclusively in the genre of comedy.

An assorted selection of 10 films, including one from Turkey, will vie for the international competition's Crystal Apricot Prizes -- renamed when another film festival in Armenia said "Golden Apricot," the title MUFF had initially selected for its award statuettes, was originally part of their festival's title.

The Crystal Apricots will be handed out in five categories: best film, best director, best screenplay, best actor and best actress. The Crystal Apricot for Best Film will come with a cash prize of 10,000 euros, while the rest of the awards will bring their winners a cash award of 3,000 euros. The international competition will also hand out a Jury's Special Prize, a Turkish Film Critics Association (SİYAD) Prize and an Audience Award named after the late Turkish comic actor Kemal Sunal, who died 10 years ago. Sunal will also be remembered at the festival with a special section dedicated to his movies.