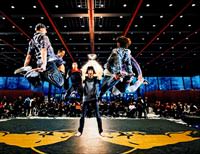 'Red Bull BreaKings', which will take place in the historical Sirkeci Train Station today at 17:00 will be showcasing 16 breakdance groups from both Turkey as well as all from all over the world. The event is free so go check out breakdancers competing to be chosen as the best.

Tonight is the second time 'Red Bull BreaKings' comes to Turkey, the first being on July 31st-August 1st, 2010 in Marmaris. The Berlin dance group Flying Steps will be judging the event. The five-member group, which has been named Breakdance Champions five times in the past, will also be putting on a performance for the audience.