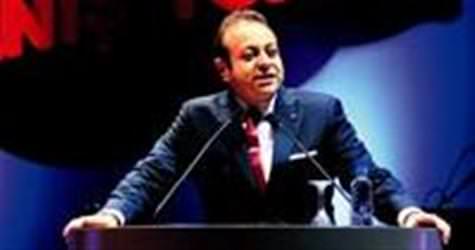 The cultural enthusiasm lasting for more than two years in İstanbul is coming to an end as the metropolis prepares to hand over the title of European Capital of Culture (ECOC) to two other European cities, the Finnish city of Turku and Estonia's Tallinn, in 2011.

The end of Istanbul's term as cultural capital was marked with a reception on Sunday at the Harbiye Congress Center that drew a large group of guests, including top state officials and Istanbul 2010 ECOC Agency officials as well as members of the press.
State Minister and chief negotiator for EU talks Egemen Bagis, State Minister Hayati Yazici, Istanbul Governor HUseyin Avni Mutlu, Mayor Kadir Topbas, Istanbul 2010 ECOC Agency executive board chairman Sekib Avdagic and Husamettin Kavi, the chairman of the advisory board of the Istanbul 2010 ECOC, were among the guests.

"The Istanbul 2010 agency launched the European Capital of Culture program, but all the people of Istanbul contributed to the events and it helped reveal [that there is] a huge awareness of culture and arts [in this community]," Topbas told Today's Zaman during Sunday's reception. "This is very important in terms of comprehending the arts. … [Istanbul 2010] has turned into a milestone. From now on, culture and arts will be perceived more differently and urban life will develop in accordance with these [İstanbul 2010's] contributions," Topbas said.

"Another important feature of the process is that Istanbul is the only city outside the European Union that has assumed this title," Topbas added. "Istanbul deserves this. It is already a city that owns these values. And now we have all realized this, and this will go on. When we say Istanbul, we are talking about the center of the world. Next, we will be hosting the 2011 World Wrestling Championship, and in 2012 we will be the European Capital of Sports and maybe later we might even host the Olympic Games… This city deserves all this."

A sampling of artistic events presented throughout the year as part of the ECOC program was showcased during the reception. Live performances by the Tarlabasi Children's Choir, the Bosporus Choir and the Ladies and Gentlemen's choir as well as a tiny theater performance titled "Istanbul Istanbul" enlivened the reception.

Apart from the artistic performances, the reception also served as a means of reflection for the Istanbul 2010 ECOC Agency on what had been done throughout the whole year.

The title of European Capital of Culture was officially handed over to Finland and the reception ended with a concert titled "Istanbul'dan Yansimalar" (Reflections from Istanbul), by the Luigi Compaccio Quartet and the Swing a la Turc Project.