Thousands come out to usher off ‘Kıvırcık Ali’ 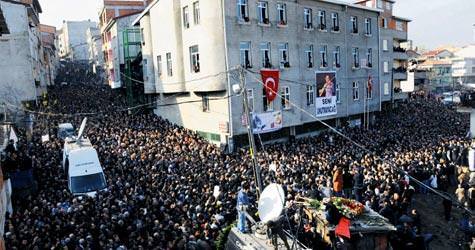 Thousands flocked to the funeral for the famous Turkish folk musician Ali Özütemiz, otherwise known as ‘Kıvırcık Ali’ ushering him off on his ‘final journey’ with tears and carnations.

The ceremony for the beloved musician who was killed at the age of 42, in a car crash early Tuesday morning in Çatalca, Istanbul, was held at a Cemevi frequently visited by the musician,
The funeral ceremony was held on Wednesday at the Avcılar Er Mahmut Dede Cemevi in Istanbul and was attended by his family and friends and thousands of fans as well as a number of Turkey's prominent figures in both politics and the arts. Amongst those in attendance were newly resigned CHP District Chairman Berhan Şimşek, CHP Istanbul Deputy Mehmet Sevigen, Avcılar Mayor Mustafa Değirmenci, Arif Sağ, Davut Güloğlu, İbrahim Tatlıses, Onur Akın, Suavi, Edip Akbayram, Hakkı Bulut, İzzet Yıldızhan and Nuri Sesigüzel. During the ceremony, approximately 20,000 people surrounded the Cemevi. Some citizens came out on their balconies or roofs to witness the ceremony in tears.
It was the two children he left behind that appeared to be suffering the most. His son Eren Özütemiz was serving his military duty at the time and was devastated by the news of his father's death. He was granted leave to attend the funeral, where he visibly experienced a nervous breakdown as he yelled at someone close to him who was trying to take the musical instrument out of his hand. He yelled out, "Leave it that belonged to my father." The musician's daughter Ecemsu fainted due to the intensity of the crowd and had to be taken to an ambulance. She was only able to return to the ceremony after she received medical attention.
Speaking at the ceremony, CHP Deputy Mehmet Sevigen stated; "Ali why did you go and leave us? Ali, I need to tell you something; we weren't able to bring further democracy to this country. We weren't able to bring freedom. Ali, we didn't bring freedom to the Alevi's. This was not the time for you to go."