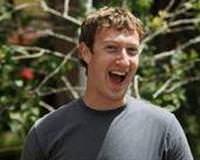 Facebook founder Mark Zuckerberg met Jesse Eisenberg -- the actor whose less than flattering portrayal of him in "The Social Network" won an Oscar nomination -- for the first time on this weekend's Saturday Night Live.

Eisenberg, a guest host on the NBC show, asked Zuckerberg, "You ever end up seeing the film?"

"Yeah, I did," Zuckerberg replied.

"It was... interesting," Zuckerberg said.

The two ended the brief encounter before a live studio audience -- and millions of TV viewers -- with a handshake.

Zuckerberg probably won't be winning any acting awards for his brief and stilted appearance. He initially appeared on camera backstage with the show's producer Lorne Michaels, watching a monitor that showed Eisenberg and SNL actor Andy Samberg comparing notes on how they portray Zuckerberg.

"Why can't I go in there? I'm the real Mark Zuckerberg. That guy's like my evil twin," said Zuckerberg, apparently reading lines to Michaels.

When Zuckerberg appeared on stage seconds later, Samberg asked if he and Eisenberg had ever met before. Both said no. "Awk-ward," Samberg said as he smiled and fled the stage.