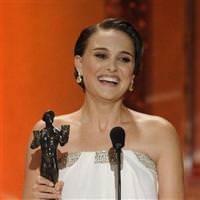 Oscars front-runner "The King's Speech" won the top prize at the Screen Actors Guild Awards on Sunday, giving the British royals drama yet another boost four weeks ahead of Hollywood's biggest night.

The film took the prize for best ensemble cast, the guild's equivalent of the best picture Oscar.
While SAG's top honor has a spotty record as an Oscar barometer -- with a success rate of about 50 percent -- "The King's Speech" has been on a roll in the past week, winning the top prizes from both Hollywood's directors and producers.
The winners of SAG's individual acting awards mirrored the results at the recent Golden Globes and the Critics' Choice Movie Awards, further reducing the likelihood of much surprise when the Oscars are handed out in Hollywood on Feb. 27.
British actor Colin Firth, who stars in "The King's Speech" as stammering wartime monarch King George VI, was named best actor. Natalie Portman was named best actress for her role as an unhinged ballerina in "Black Swan." The supporting prizes went to a pair of actors from "The Fighter," a fact-based boxing drama: Christian Bale as a crackhead former boxing hero and Melissa Leo as a feisty, blue-collar matriarch.
"The King's Speech" triumphed over "Black Swan," "The Fighter," the Facebook drama "The Social Network" and the lesbian family comedy "The Kids Are All Right." It picked up a leading 12 Oscar nominations on Tuesday, including best picture, director and actor.
Firth, previously best known for romantic comedies such as "Bridget Jones' Diary," thanked his "dream cast." Australian actor Geoffrey Rush, an Oscar nominee for his role as the reluctant king's unconventional speech therapist, said the movie was a true example of ensemble acting.
"We have such a roll call of extraordinary heavy hitters," said Rush.
Portman, 29, trained for months for her role in "Black Swan," a melodrama set in the New York ballet world. She recently became pregnant by one of the movie's co-stars.
The Screen Actors Guild also honors performances in television. HBO's new Prohibition-era series "Boardwalk Empire" took best cast ensemble for a drama, while its star Steve Buscemi won for his role as a corrupt politician.
Emmys favorite "Modern Family" won for best comedy ensemble, and 89-year-old former "Golden Girl" Betty White was a popular winner for her role as a sassy caretaker in the new comedy "Hot in Cleveland." Julianna Margulies made it two in a row for what she called the "role of a lifetime" as a buttoned-up lawyer in the legal drama "The Good Wife," and Alec Baldwin won for the fifth straight year for his role as a network executive in the comedy "30 Rock."
Last Update: Feb 01, 2011 10:53 am
RELATED TOPICS