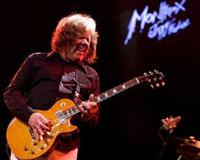 Gary Moore, former star of the Irish rock band Thin Lizzy, has died in Spain. The Belfast-born guitarist was 58.

"It is with deep sorrow and regret that we have to announce that Gary Moore passed away while on holiday in Spain last night," a message on his official website said on Sunday.

"Our thoughts are with his children, family and friends at this sad time."

According to the Irish Times website, Moore was found dead in his hotel room in Estepona in the early hours of Sunday morning. A postmortem was due to be carried out in the nearby city of Malaga, the newspaper added.

A spokeswoman for Britain's Foreign Office in London said: "We are aware (of Moore's death), and we stand ready to provide consular assistance. We are very sorry for his family's loss."

Moore was just 16 years old when he moved from Belfast to Dublin in 1969 to join Skid Row, which featured Phil Lynott as lead singer.

Moore was later brought into Thin Lizzy, best known for hit songs like "Whiskey in the Jar" and "The Boys Are Back in Town."

He replaced the departing Eric Bell, who told the BBC: "I still can't believe it. He was so robust, he wasn't a rock casualty, he was a healthy guy. He was a superb player and a dedicated musician."

As well as playing with Thin Lizzy for several periods, Moore worked separately with Lynott, who died in 1986 from drug-related complications.

Moore also worked with a number of top artists, including George Harrison.