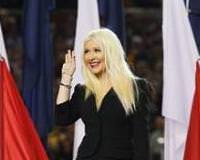 Christina Aguilera fumbled a line of the national anthem but at least there were no wardrobe malfunctions during the entertainment segments at Sunday's Super Bowl.

The Grammy winner flubbed the lyrics of her rendition of "The Star-Spangled Banner," which preceded the title game between the Pittsburgh Steelers and the Green Bay Packers.

Instead of "O'er the ramparts we watched were so gallantly streaming?," she said, "What so proudly we watched at the twilight's last gleaming?," a variation of a line she had already performed.

She was mildly criticized on Internet and social networking sites but there was none of the outrage caused when Janet Jackson infamously bared a breast after a "wardrobe malfunction" at the 2004 Super Bowl.

The NFL has since turned to safer acts and the headline performers this year were the Black Eyed Peas, who made a spectacular entrance, descending from the Cowboys Stadium rafters.

The hip-hop band performed a string of their hits, including "I Gotta Feeling," "Boom Boom Pow," "Where Is the Love?", before they were joined on the giant makeshift stage by Slash and then Usher.

Around 100,000 people packed into the stadium to watch the game and entertainment shows while more than 100 million were expected to watch on television.