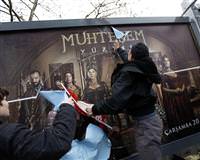 A steamy television period drama about a 16th century sultan has angered conservative Muslims in Turkey and sparked a debate over the portrayal of the past in a country rediscovering its Ottoman heritage.

"The Magnificent Century" chronicles the life of Suleiman the Magnificent, who ruled the Ottoman Empire in its golden age.

Scenes which have particularly offended show a young and lusty sultan cavorting in the harem and drinking goblets of wine, pursuits frowned upon by the Muslim faithful for whom the sultan had religious as well as temporal authority.

Producers of the series, which has drawn huge audiences and boosted sales of history books on the period, said they wove in imagined elements to the love story between Suleiman and his favorite slave concubine, and later wife, Hurrem, with the aim of presenting the characters as more human.

But for many pious Turks, including Prime Minister Tayyip Erdogan, who leads a government with its roots in political Islam, the series is an insult to the nation's forebears.

That is not something he welcomes at a time when he is trying to revive Turkish influence in the old Ottoman domains across the Middle East. Tens of thousands of complaints have been filed with the national TV watchdog.

Known as the "Lawgiver" among Turks, Suleiman is regarded as a sacred character, whose rule from 1520 to 1566 marked the height of the Ottoman military, political and economic power, when it stretched from Budapest to Mecca, Algiers to Baghdad.

Last month, demonstrators chanting "Allahu Akbar" (God is Greatest) staged a protest outside the offices of the TV channel broadcasting the series, and the state broadcasting watchdog, the Radio and Television Supreme Council, told producers the show was "contrary to the values of the national and moral values of the society."

Descendants of the Ottoman dynasty have also criticized it, and a leading scholar said it contained historical inaccuracies.

The critics, though, are distorting history themselves, argues Mustafa Akyol, a columnist who frequently writes on religion and politics for Turkish newspapers.

"The first problem is the over-idealization of the Ottoman Empire," he said.

He said the Ottomans might have been good "servants of Islam', but they were also humans with sins and temptations.

The dispute has deep resonances in Turkey. It echoes divisions in a country that straddles Europe and Asia.

Erdogan's AK Party is trying to forge a more open Islamic identity in a nation, nearly 90 years after Mustafa Kemal Ataturk founded a determinedly secular and Western-looking Turkish state in the postwar ruins of the Ottoman empire.

The arguments between the religious- and secular-minded over the TV show has also coincided with new restrictions on alcohol sales that have prompted accusations that the AK Party is interfering in people's lifestyles and imposing Islamic values.

Erdogan called The Magnificent Century "an attempt to insult our past, to treat our history with disrespect and an effort to show our history in a negative light to the younger generations."

The Ottoman Empire was long denigrated by the successors of Ataturk, who ended the sultanate. Official state ideology blamed decadence and religiosity on the part of the Ottoman rulers for Turkey's humiliating defeat as a German ally in World War One and the carving up of its Middle Eastern empire by Britain and France.

The renewed interest in the glory days of the Ottoman empire comes as Turkey enjoys its greatest prosperity of the modern era, giving a young population increasing pride and confidence.

Power, experts say, has shifted to a new middle class of observant Muslims ready to reinterpret Turkey's historical narrative, loosening the strictures of Kemalism -- the ideology that shaped the Turkish republic in its early years, stressing Ataturk's vision of secularism and nationalism.

The "Ottomania" gripping Turkey is manifest in museum exhibits on Ottoman art, clothes and calligraphy, restoration of Ottoman buildings and an interest in Ottoman Turkish language courses offered by academies.

Turks' rediscovery of their past coincides with frustration at the slow pace of Turkey's accession to the European Union.

Sent into unceremonious exile by the young Turkish republic, descendants of the Ottoman imperial family are also enjoying a rehabilitation of sorts, with surviving members appearing in the media.

"There is a new interest among Turks in rediscovering the Ottoman past," said Ilber Ortayli, the director of Istanbul's Topkapi Palace, residence of Ottoman sultans for 400 years. "No nation has the luxury of rejecting its past, especially if you have a magnificent past. Even during the republican years people were proud of their Ottoman history."

"THE PAST IS AN INVENTED LAND"

Reactions to The Magnificent Century recall the divided reception given to a film in 2008 which depicted Ataturk as a hard-drinking, lonely man beset by doubts.

With the boot on the other foot, Kemalists called that work an insult to the memory of modern Turkey's founder.

Turkish society often seems polarized between conservative Muslims and secularists, each group viewing their country through different sides of a prism.

Turkey's television supervisors said they received more than 70,000 complaints after the first airing of the drama.

Meral Okay, the screenwriter, said most of the anger stemmed from the fact that the film-makers had opened the doors of the harem to the public.

"We have been saying the same thing from the start. This is a fiction inspired by history," said Okay. "By entering the harem, we made all those untouchable and respected characters of history closer to us. We gave them a material existence as humans, with fears, anger and passions."

Fiction or not, viewers were split as to whether it was appropriate to show the revered Suleiman cavorting in the harem.

"I think it hurts our national pride," said Huseyin Kilic, who runs a tobacco shop in Istanbul. "Young generations look up to those historical figures who have achieved so much. And what do they see on this show? These great men have a weakness for women - and not only one woman, many of them!"

But Sevda Gunes, a 19-year old student, said she did not understand all the fuss over the drama and the sultan.

"I don't know why people are bothered so much. Besides, it's just a show. Why can't people just watch it and have fun?"