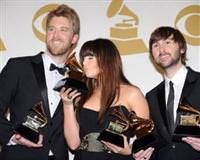 Country trio Lady Antebellum and Canadian rock band Arcade Fire lit up the Grammy Awards on Sunday, winning key prizes in a ceremony packed with upset victories and a humiliating setback for Eminem.

The hip-hop star, who led the field with 10 nominations and had been expected to dominate the ceremony, ended up with just two awards in the rap field.

Lady Antebellum, on the other hand, picked up five prizes, including song and record of the year. It marked the second consecutive year that a country act dominated the event, after Taylor Swift grabbed the Grammy glory in 2010.

Arcade Fire denied Lady Antebellum a clean sweep by winning the event's top prize, album of the year. In a year dominated by pop, R&B and hip-hop acts, few pundits had given the defiantly independent Montreal band any chance of taking the top prize. Moreover, the band lost two earlier races.

They were so shocked to hear their name called by presenter Barbra Streisand that they delivered an unscheduled performance to close the show.

The band was honored for its album "The Suburbs," which topped the U.S. and Canadian charts last year without the support of a major label. It was the first time a rock band had won the award since U2 in 2005.

The members of Lady Antebellum said they were left in tears backstage by their unexpected wins, which also included three awards in the country field, all generated by their album "Need You Now."

"We'll probably never have one of these moments ever again in our career," said singer Charles Kelley. "You're not going to win five Grammys ever again. We know that, we're realistic. So we're gonna try to soak it up."

The winner of the best new artist prize was also a shock, as American bassist Esperanza Spalding took the honor over a pair of red-hot Canadian idols. Justin Bieber and Drake went home empty-handed after two and four nominations respectively.

Spalding told reporters that she hoped Bieber's fervent fans would not be too aggrieved by their hero's losses.

"When this is all over we're all colleagues again, just like we were before," she said. "He's unquestionably a talented young man. He's going to do lots more things in the future, and his fans will be getting lots more CDs to sink their teeth into."

Spalding, 26, was the first jazz artist nominated for best new artist in 35 years. But she is not exactly a newcomer, having released her breakthrough album in 2008.

Flamboyant pop singer Lady Gaga and rapper Jay-Z won three awards each, both of them beating Eminem along the way.

Lady Gaga was honored for her album "The Fame Monster," and received two awards for her song "Bad Romance." Jay-Z's haul included a pair in the rap field for his duet with Alicia Keys on "Empire State of Mind," a love letter to New York.

Eminem received Grammys for best rap album ("Recovery") and rap solo performance ("So Afraid"). Riding a natural high after a successful comeback album recounted his near-fatal struggle with addiction, he had been expected to win favor with the 12,000 music industry insiders who vote for the Grammys.

He has now lost the album of the year category three times, and has yet to win an award for record or song of the year. His career haul stands at 13.