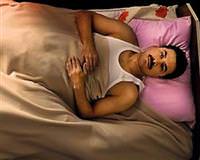 "Almanya," a rare feel-good movie about Turkish immigrants in Germany which premiered at the Berlin Film Festival Saturday, defies recent political declarations that multiculturalism has failed in Europe.

Coming amid an anguished public debate about the place of foreigners in Germany, the debut movie by two Turkish-German sisters delighted filmgoers with its comic and optimistic depiction of immigrants' efforts to integrate in an alien society.

"After so many dark films we wanted to show a perspective that we felt a lot closer to, that was not so extreme and negative," said Nesrin Samdereli, who wrote the screenplay, at a news conference in Berlin.

"Encounters between Germans and Turks are often quite comic, and that is what we wanted to portray."

Turkish-German films such as Fatih Akin's "Head On" -- the first German film in 18 years to win the top prize at the Berlin festival -- have won much critical acclaim in recent years, yet have mostly focused on social troubles in immigrant communities.

"Almanya" humorously narrates the story of a family of Turkish origin that moved to Germany to find better-paid work in the 1960s and now bridges two cultures.

Turning the classic perspective of immigrants as the Others on its head, "Almanya" shows how shocked the family is to arrive in a country populated by blond giants who devour pigs, worship a suffering figure on a cross and speak "gibberish."

Director Yasemin Samdereli says she created a fantasy language as a stylistic means "to give German viewers the same feeling of oddness and confusion caused by a new language."

"Almanya," which will be released in Germany in both Turkish and German, pokes fun at the need to assimilate. In one scene, when a "Gastarbeiter" (guest worker) seeks to obtain German nationality, a bureaucrat insists he commits to devouring pork, holidaying in Majorca and sporting a Hitler-esque mustache.

But the film also shows the great efforts made by immigrants to integrate, while retaining their own culture.

"We had noticed over many years that the issue of Turks in Germany is often cast in a negative light...and it was quite tiring," said Yasemin Samdereli. "My own family tried very hard to face up to the new challenges (when they arrived in Germany), but this was never portrayed."

The Samdereli sisters said they incorporated many autobiographical experiences into the film, such as forcing their mother to stage Christmas for them.

The film ends on an optimistic note, with Merkel holding a ceremony for the Turkish guest workers to acknowledge their contribution to the German economic miracle. A third-generation Turkish-German boy holds a speech in perfect German.

"It shows multiculturalism hasn't failed (and) is perhaps still emerging," said actor Vedat Erincin, who plays the elderly guest worker. "We feel like neo-Europeans, we live here, this is where our children are growing up and it is going to get much, much better."

The 61st Berlin film festival runs to February 20 this year, culminating with the awards ceremony taking place on February 19. "Almanya" is screening in the main film line-up but is not in the running for awards.