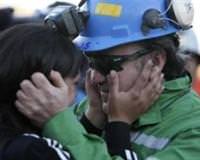 Emblazoned on the cover of movie industry magazine Variety’s Berlin film festival daily publication today is a full-page advertisement for “Atacama’s 33″, a retelling of the incredible story of survival in Chile’s northern Atacama desert which ended in such dramatic fashion in October.

Boy, that was quick! It seems like yesterday that the 33 miners, trapped deep underground for two months, were hauled to safety in scenes watched by hundreds of millions of well-wishers around the world.

The movie industry has rarely been one to stand on ceremony, although there are a few exceptions. "The King's Speech", for example, was only made after the death of the Queen Mother, who had said that watching her husband's story re-told on the big screen would have been too painful. For its makers, the long wait was worth it as the movie starring Colin Firth basks in critical and commercial success.

Whether "Atacama's 33″ matches that glory remains to be seen — the first advertised screening in Berlin is tomorrow morning, with potential buyers or distributors likely to be the main target of today's advertisement. Billed as "The story of how 33 miners bravely survived, as one nation rose to the challenge" to rescue them, the film comes from America Video Films, although the fact that its theatrical arm also looks like being involved suggests that its backers see the potential for a theatrical release.

Even if the movie makes it to cinemas, it is unlikely be the last movie adaptation of the story.