Letters to Obama from Americans becoming a book 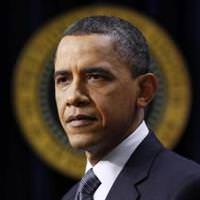 President Barack Obama may have inadvertently stolen an author's thunder Tuesday when he said someone is working on a book about the 10 letters from regular Americans that he reads every night.

Obama has been receiving a folder full of the letters every day of his presidency, chosen from the thousands that the White House Correspondence Office receives every day. The letters reflect the viewpoints from Americans concerned enough about various issues -- or problems in their own lives.

Aides say Obama reads the letters as a way to stay in touch with the public -- to get outside what he calls "the bubble" that is life within the White House.

Tuesday, he was asked during a news conference about whether he feels the pain of Americans who have been hit by the economic downturn, and who may be hurt by cutbacks in social services programs.

"Somebody is doing a book about the 10 letters that I get every day, and they came by to talk to me yesterday," Obama told a news conference televised nationally and internationally.

"What I told them is I'm so inspired by the strength and resilience of the American people, but sometimes I'm also just frustrated by the number of people out there who are struggling, and you want to help every single one individually," he added, either sharing the unnamed author's secret -- or providing an unexpected burst of publicity for the upcoming book.