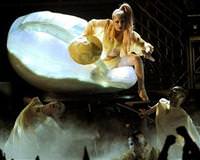 Lady Gaga wowed fans once again, this time upon her arrival to the Grammy Awards… Lady Gaga entered this year's awards ceremony held at the Los Angeles Staples Center by being carried in on a platform held by five people which carried a dinosaur egg containing Gaga.
The creative singer arrived just like a princess on a palanquin carrying a dinosaur egg created collaboratively by Turkish designer Hüseyin Çağlayan and House of Mugler. Gaga used an oxygen tank in order to breathe inside the 'vessel' which she then exited when she took the stage. On Twitter, Gaga commented on the egg designed by Hüseyin Çağlayan and House of Mugler, by stating that she wanted to deliver the message that she was going through an incubation period.
When Lady Gaga was awarded the 'Best Pop Vocal Album' award, she took to the podium wearing a sexy mini black leather dress designed by Çağlayan.