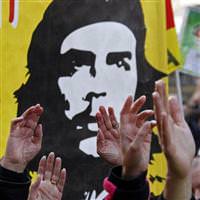 The Irish artist whose poster of Latin American revolutionary Che Guevara became one of the most reproduced images of the 20th century, said he has decided to copyright the image to block "crass commercial" use.

Jim Fitzpatrick produced the classic red and black print of the long-haired Che wearing a soldier's beret with a single star in 1968 and distributed it copyright-free for use by revolutionary groups in Europe.

It was quickly adopted by left-wing students, whose t-shirts and posters helped turn the image into a global sign of rebellion.

But the image of the Marxist revolutionary, who helped bring Fidel Castro to power in 1959, has since been co-opted by makers of mugs, baseball caps and even lingerie. The image is emblazoned across Cuban-themed restaurants around the world.

"It's not about making money, it's to make sure that it is used properly... that it's not used for crass commercial purposes," said Fitzpatrick, a Celtic artist who has produced album covers for Irish groups Thin Lizzy and Sinead O'Connor.

After four decades of allowing the image to be reproduced free of charge, Fitzpatrick said he has applied for documentation to prove that he is the copyright holder.

He intends to travel to Havana later in the year to hand the ownership rights to Guevara's family.

"I have no problem seeing it on mass numbers of t-shirts. I just don't want someone to be making vast amounts of money from it when that money could be used for a children's hospital in Havana," he said.

Complicating the issue is the fact that Fitzpatrick's artwork was based on a photograph taken by the Cuban photographer Alberto Korda at a funeral in Havana.

Korda successfully sued a London advertising agency for using a version of the Guevara image in an advertising campaign for vodka brand Smirnoff. Korda's daughter later moved to block the use of the image by critics of the Cuban regime.

Fitzpatrick said earlier precedents from the pop art era of the 1960s made him confident that his print would be recognized as a separate work of art from the photograph.

Either way, the families of both Korda and Guevara are united in their wish to frustrate commercial uses of the image that would likely be anathema to the communist revolutionary, Fitzpatrick said.

"I simply want to hand it over and give the family the rights to the image that I created and let them decide what to do with it," he said.

"I caused the problem and now I am seeking to rectify it."