Our Eurovision entry is ‘Live it up’ 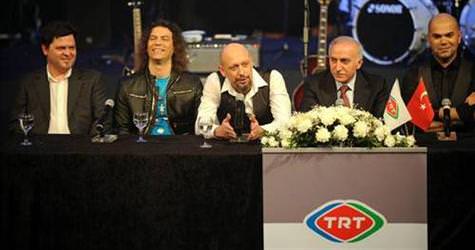 The band Yüksek Sadakat, our representatives in the 56th Annual Eurovision Song Contest which will be held this May in Dusseldorf, will be competing with a song in English entitled ‘Live it up.’

Last night, Yüksek Sadakat announced on the state-run television station TRT that 'Live It Up' had been chosen out of three prospective songs. Members of the group and TRT General Manager İbrahim Şahin answered questions by the press. Şahin states, "After this long process, now there is a sweet excitement. We did not interfere in their songs or the words whatsoever. We left the group free to decide. If the group succeeds, then we may send them once again to be our representatives. "Members of the group stated last night that they have chosen a strong song and if it succeeds it will be a great achievement.

MUSIC AUTHORITIES APPROVE
Music authorities that have had the chance to hear the song have approved. According to Garo Mafyan, "The song is very good. I really like the infrastructure. I think it'll place in the top three." Meanwhile, Metin Özülkü states, "The infrastructure of the song is excellent. I think they made a song that could be one of the top three." Bülent Özveren also stated that he was sure this song would take them to the finals.