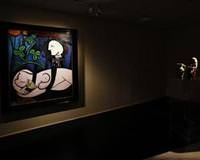 The most expensive painting to be sold at auction, Pablo Picasso's "Nude, Green Leaves and Bust," goes on public display in Britain for the first time on Monday at the Tate Modern gallery in London.

The 1932 work, which sold for $106.5 million at Christie's in New York last year, has been lent to the Tate galleries from a private collection and will be on display in a new Pablo Picasso room in the Poetry and Dream section.

"Nude, Green Leaves and Bust is one of the sequence of paintings of Picasso's muse, Marie-Therese Walter, made by the artist at Boisgeloup, Normandy, in the early months of 1932," said Nicholas Serota, the Tate's director.

"They are widely regarded as amongst his greatest achievements of the inter-war period."

Picasso first encountered Walter in 1927, but their relationship had to remain secret from his wife, Olga.

According to the Tate, it was only in 1931-2 that he began to make sculptures and paintings in which the manipulation of Walter's body was explicit and eroticised.

Although Picasso had long disguised his affair with Walter, Nude, Green Leaves and Bust was among the works which openly charted the lovers' obsession with each other.

Before it was sold in May, the work had been in the collection of L.A.-based collectors Sidney and Frances Brody for almost six decades.

They acquired the work in 1951 from Paul Rosenberg & Co., Paris and New York who in turn had acquired it from the artist in 1936. During that period it was exhibited publicly only once, in 1961, to commemorate Picasso's 80th birthday.