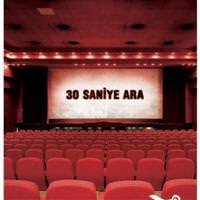 Akbank’s seventh annual Short Film Festival kicks off today. The festival hosts 92films from 21 different countries, including two films from Turkey which will be showcased in a ‘special showing’ section.

The Akbank 7th Short Film Festival, which runs from March 7th to March 17th, will be a 'short and influential' film feast. Divided into categories such as 'International', 'Experimental', 'From Short to Long', 'Documentary Cinema', 'Animation Shorts' and 'Special Showings,' the festival hosts a number of domestic and international projects.
SHOWINGS ARE FREE
In the 'From Short to Long' category, in addition to Seyfi Teoman's short film 'Apartman' (The Apartment) his first feature length film 'Tatil Kitabı'(Summer Book) will also be shown for viewers. The 'Special Showing' category will have two films from Turkish directors, Murat Şeker's 'Türk Gibi Başla Alman Gibi Bitir' (A Turkish Heart with a German Mind) and Serkan Yıldırım's 'Ellerdeki Zaman' (Time in our Hands).
In addition to 92 films being shown from 21 different countries, the Akbank Short Film Festival also boasts a number of lectures and workshops. All showings Akbank Sanat will be free of charge.