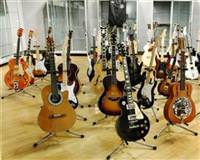 The proceeds from the sale at which every lot found a buyer will go to the 65-year-old guitar legend's Crossroads Center drug and alcohol treatment facility in the Caribbean.

The auction total without the buyer's premium was around $1.8 million, and the sale also included instruments donated by Clapton's musician friends Jeff Beck, J.J. Cale and Joe Bonamassa.

"Eric Clapton inspires an ever-expanding fan base, many of whom made the journey to Bonhams in New York over the past few days and joined us for this remarkable auction," said Jon Baddeley, worldwide head of collectables at Bonhams.

"We were delighted to play our part in raising funds for The Crossroads Center, a charity with a noble mission and a cause that remains very close to Eric's heart."

Clapton, who did not attend the auction as he and his band were scheduled to perform in LA, is considered one of the greatest guitarists in rock history, and is recognized as a solo artist and for his collaborations with The Yardbirds and Cream.