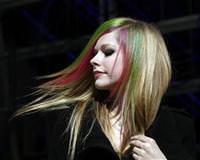 Canadian singer Avril Lavigne says her fourth album "Goodbye Lullaby," released in the United States on Tuesday, shows a different side to the petulant pop-punkster image she has perfected in the past.

"And I think it's good for me to kind of switch it up a bit and do that."

At 26, and recently divorced, the star who burst on to the scene as a teenager with "Let Go" aims to win over a new audience with the fresh approach while still holding on to her core fanbase.

"I think, if anything, this record ... may be able to gain more of a mature audience along with it, and I hope to keep the same kind of core younger group," Lavigne explained.

"It's different this record for me, but it's very me. It's my personality, it's my style. It's not like I went and did something totally different or anything like that. It just showcases a different side to me and more of that."

Whether the album succeeds will soon become clear when the pop charts are published in the United States, Britain and other key markets where Lavigne's fanbase is strong.

But some critics are concerned that the artist whose total album sales are estimated at 30 million may have fallen between two worlds.

"Avril Too Serene" was the New York Post's headline.

"Four discs into her career and after a highly publicized split from her Sum 41 groom, Deryck Whibley, Lavigne's latest record smacks of maturity (that's bad) and is salted with self-blame and doubt (worse).

"Add to that a surprising lack of divorce venom, and the result is a milquetoast breakup album -- a 13-song pileup of easy rock."

Rolling Stone magazine awarded the record three stars in a mixed review, and also noted an obvious change in direction.

"Avril Lavigne is a romantic," said Jody Rosen. "That's a hard concept to wrap your mind around."

Among the collaborators on the album was ex-husband Whibley, Evan Taubenfeld and Butch Walker and songwriter/producer Max Martin.

It includes the song "Darlin,'" which Lavigne wrote when she was 14 and living in Canada.

"So you know, bringing back old songs that I did when I was younger and starting new ones and doing it on my own and playing the piano more and just recording it at my house ... it was just a different approach," she said.