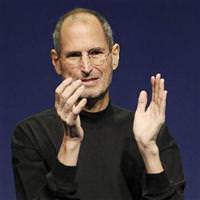 The Silicon Valley icon, who has battled a rare form of pancreatic cancer and undertook a liver transplant in 2009, granted exclusive interviews to the biographer over the course of three years -- an unprecedented level of access to the CEO.

"Just as he did with Einstein and Benjamin Franklin, Walter Isaacson is telling a unique story of revolutionary genius," Simon & Schuster Publisher Jonathan Karp said in a statement.

Jobs is credited with changing the course of personal computing during his two stints as Apple's chieftain, while his idiosyncratic style and the iconic iPod, iPhone, iPad and Mac have made him a household name.

Deemed irreplaceable by many Apple fans and investors, he began an indefinite medical leave of absence in January to concentrate on his health -- two years after a previous health-related hiatus.

The 55-year-old Apple co-founder has said nothing about the nature of his latest medical concerns despite widespread criticism over the inadequacy of past disclosures about his health. Jobs last appeared in public in March to launch the iPad 2.

Jobs' biography -- entitled "iSteve: The Book of Jobs" will be published by Simon & Schuster in early 2012. Author Isaacson is a former managing editor at Time magazine and the former head of CNN.