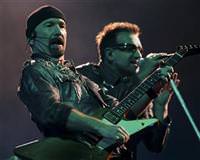 Irish band U2's current 360 world tour is the most successful ever, beating the record set by The Rolling Stones four years ago, promoters Live Nation Entertainment said on Monday.

The Irish supergroup, who played Brazil at the weekend, will gross ticket sales of more than $700 million when their 360 tour finally wraps up in Canada in July, Live Nation said.

The U2 360 tour, staged in the round in a transportable stadium, will have been seen by more than 7 million people in 30 countries when it ends.