First time in a bikini since giving birth! 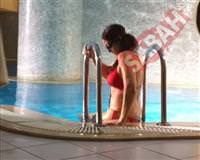 Monica Belluci, who has been donning a headscarf for her latest film Rhinos Season, was recently photographed in a bikini for the first time since giving birth!

FROM HEADSCARF TO BIKINI
Italian actress Monica Belluci has been in Turkey for over a month now to film the movie Rhinos Season directed by Iranian director Bahman Ghobadi. Up until now, images of the famous Italian actress that have made it to the press have always depicted her in character, veiled wearing a headscarf. This time however, Belluci was seen wearing a red bikini for scenes in the film that take place in a hotel in Istanbul.
HER PREGNANCY WEIGHT REMAINS
The Italian star had yet to be seen photographed in a bathing suit since giving birth to her daughter with Vincent Cassel, named Leonie on May 21st, 2010. Belluci had no problems wearing a bikini in Turkey however… The beautiful star may have not lost all of her baby weight just yet, however despite being 46 years old, the fact that she was quickly able to get into shape after giving birth is evident in the photographs.