Music is my destiny 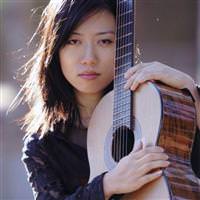 Performing tonight in Istanbul, Xuefei Yang is the first ever Chinese musician to study guitar at a Chinese conservatory. Yang: There is now an interest in guitar in China.

Xuefei Yang, the daughter of teacher parents, is a 34-year-old guitarist. When she began studying guitar a department devoted to the instrument didn't even exist in Chinese conservatories. However, taking the stage at the First Chinese Guitar Festival at the age of ten, Yang's performance was so spectacular that the Spanish Ambassador gave her a guitar as a gift.
At the age of 14, she performed in Madrid for an audience that included Rodrigo, garnering much acclaim, upon which she then became the first guitarist to be accepted to a classical music school in China. Yang's latest album, Rodrigo's Guitar Concierto was released by EMI a few months ago. Tonight Yang performs at 20:30 as part of a series of Istanbul Recitals at the Fulya Sanat Concert Hall. Prior to her concert, entitled 'From Bach to Brazil', Yang shared her struggle to play classical guitar in China with SABAH.
MISCHIEF INTRODUCED HER TO THE GUITAR
"My introduction to the guitar was fate. I was really naughty as a child. My parents decided to try to influence me to play an instrument to calm me down. They took me to the music teacher at school and my teacher explained that there was going to be a guitar group and that I could join. That was the first time in my life that I saw a guitar and therefore I believe my introduction to the guitar was fate."
GUITAR WASN'T LOVED IN CHINA
"The cultural revolution which began in China before I was born resulted in the prohibition of all types of music from the west. Instruments such as the piano and the violin did receive interest despite the situation at the time. However, it was because they are symbolic of the classical music world. The guitar was perceived as an instrument played on the streets and it wasn't popular for many years. However I loved the guitar and was able to make it loved. Now there is an interest in the guitar in China."
ACCEPT ME WITH MY GUITAR
"I was the first one to be accepted into China's best conservatory with the guitar. There wasn't a department for guitar, but I asked them to accept me with my guitar. After I became known worldwide, a number of conservatories in China began offering guitar education in classical music departments at conservatories. I think guitar is a very good start for young people."