Muğla brought to life by film 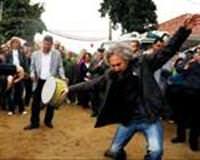 Yüksel Aksu, the director of Ice Cream, I Scream (Dondurmam Gaymak) and Muğla native is once again shooting a new film Entelköy-Efeköy in his homeland. Aksu’s film tells the story of environmentalists who move to a village and reveals what enfolds with the local residents.

Five years ago, director Yüksel Aksu returned to his homeland of Muğla to film the highly acclaimed Ice Cream, I Scream (Dondurmam Gaymak). Aksu has decided to return to his roots for his new film Entelköy- Efeköy. Five years ago, Aksu filmed Dondurmak Gaymak in Muğla with locals. The film went on to become nominated for an Oscar and was well received by fans as well as notably kicked off a series of films shot in the Aegean.
Yüksel Aksu has now begun filming his second film with his fellow locals. Filming began with music and food by locals in Muğla's Pınarcık Village in Milas. Aksu explains that this film is actually the realization of a real-life dream. "In the 90's we wanted to create a communal village, but we had no money and weren't able to do it at the time. By the time we ended up making money, we had lost our belief. So I decided to turn our dream into a film."
For filming, Aksu has casted a number of locals in addition to actors Şahin Irmak, Ayşe Bosse, Emin Gürsoy, Recep Yener, Ayla Arslancan, Ümit Olcay, Hamit Demir, Engin Akın and Nejat Yavaşoğulları. Describing Entelköy- Efeköy as an environmental film, Aksu explains that the story is about a group of environmentalists that have been stuck in the metropolis who choose to move to a village in the Aegean. The warm Aegean comedy which deals with the relations between the locals and the urban environmentalists is scheduled to be released late in 2011.