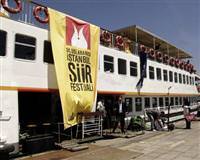 Poets at a festival in Istanbul criticized on Thursday Syria's violent repression of pro-democracy protesters as "the most savage and the most bloody among the Arab peaceful popular revolutions."

"We demand that the Syrian regime immediate ceases these massacres and resorts to peaceful democratic dialogue," said a statement issued by 20 participants in the Sixth Istanbul poetry festival from the Arab Middle East and Turkey.

Among them were Khaled al-Najar from Tunisia, Fawziyya Abu-Khalid from Saudi Arabia, Peter Laugesen from Denmark, Finnish Henrija Ringbom and Muzaffer Ozdemir from Turkey.

The festival chose as a celebratory theme for this year "Arab Spring" democratic revolutions sweeping countries in the Arab Middle East.

The declaration, which was sent to Reuters, said Syrian authorities "committed massacres against the Syrian people... marching for freedom and dignity and justice in a peaceful and civilised manner."

The Syrian state imposed severe restrictions on culture and artistic freedom under the 41-year autocratic rule of the Assad family, whose secret police jailed and tortured scores of poets and artists, including late poet Moahammad al-Maghout who wrote that repression inflicted by his compatriots was more painful than French colonial occupation.

Late Comedian and playwright Nihad al-Qalii was severely beaten after he criticised the security apparatus as thugs, and Syrian master painter Youssef Abdelke was jailed for two years during late President Hafez al-Assad's ruthless repression of secular and Islamist opposition in the 1980s.