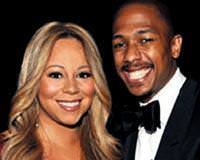 Singer Mariah Carey on Saturday gave birth to twins, delivering a boy and a girl on the third anniversary of her wedding to Nick Cannon, her spokeswoman said.

Berger said the babies weigh over 5 pounds each, and the girl is 18 inches long while the boy is 19 inches. The names of the children were not immediately known.

Grammy winning singer Carey and Cannon, an actor and rapper, were married on April 30, 2008.

"Babies were born on their wedding anniversary," Berger said in a statement. "Not even Mariah could plan that!"

Carey announced she was pregnant in October. At the time, Cannon said the couple delayed telling people about the pregnancy because Carey once suffered a miscarriage.