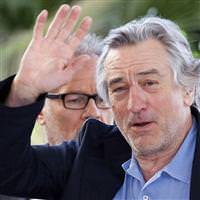 Hollywood heavyweights Robert De Niro and Jude Law fuelled excitement on the French Riviera on Wednesday at the start of the Cannes film festival, which kicks off with Woody Allen's "Midnight in Paris".

The world's biggest cinema showcase, which ends on May 22, boasts an impressive roll call of major screen stars, revered "auteur" directors and relative newcomers, raising expectations among a 4,000-strong press pack in the glamorous Riviera resort.

Gleaming luxury yachts pack the harbour around the giant cinema complex, five-star hotels are filling up with the rich and famous and Cannes organisers are hoping the 2011 edition lives up to its billing.

"What is exciting this year is ... this clash between established talent and young discoveries, and that is perhaps the heart of the Cannes mission," festival general delegate Thierry Fremaux told Reuters.

On Tuesday, Bruni announced she had cancelled an appearance in Cannes because of "personal reasons", feeding widespread rumours in the French press that she may be pregnant.

Blockbusters "Kung Fu Panda 2" starring Jolie and "Pirates of the Caribbean: On Stranger Tides" with Depp and Cruz launch in Cannes, as studios return in force after avoiding the notoriously costly trip to France due to the financial crisis over the past couple of years.

De Niro heads this year's jury, which also includes Uma Thurman and Law, and underlining the pulling power of the festival, pop diva Lady Gaga is widely reported to be putting in a "surprise" appearance on the waterfront on Wednesday.

The darlings of the European festival circuit have also put in a strong appearance -- Pedro Almodovar, Nanni Moretti, the Dardenne brothers, Aki Kaurismaki and Lars Von Trier, are all vying for the coveted Palme d'Or prize for best picture.

So is U.S. veteran Terrence Malick, back in the limelight with only his fifth feature, the eagerly anticipated "The Tree of Life" in which Pitt and Penn star in a family saga set in the American Midwest during the 1950s.

Women directors feature more prominently in the main competition than usual, although they still only account for four of 20 entries.

French actress Maiwenn Le Besco brings "Polisse", about a photographer who has an affair with a policeman, and Japan's Naomi Kawase presents "Hanezu No Tsuki".

Belgium's Dardenne brothers have a chance to become the first directors to scoop the Palme d'Or three times with "The Kid With A Bike" and festival favourite Almodovar will aim to lift his first Golden Palm with "The Skin I Live In".

Denmark's Von Trier is in competition with "Melancholia", starring Kirsten Dunst as a bride celebrating her marriage as a planet threatens to collide with Earth.

And politics will also play its part in the festival, chiefly with "La Conquete" (The Conquest), a biopic about French President Nicolas Sarkozy's 2007 election win and the collapse of his previous marriage to Cecilia.