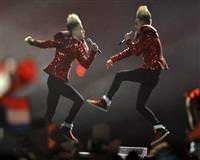 Duesseldorf sets the stage on Saturday for the grand final of the 56th Eurovision Song Contest. Germany's Lena Meyer-Landrut won in 2010 with the song "Satellite."

Here are some facts about the event:

* The first contest took place in 1956. It was originally conceived in Monaco by Marcel Bezencon and based on the Italian Sanremo Festival held since 1951. Switzerland won the first contest.

* The Eurovision Song Contest boasts a television audience estimated at around 100 million people each year.

* Singer Johnny Logan has won the contest three times. In 1980 and 1987 he represented Ireland and won both times. In 1992 he wrote Linda Martin's winning entry.

* ABBA is the most successful Eurovision Song Contest winner. The Swedish band won the contest in 1974 with the song "Waterloo."

* The most covered song in the contest is Domenico Mudugno's "Nel Blu Di Pinto Di Blu," also known as "Volare."

* Most winning songs are performed in English - songs (mostly) in English won 22 times. French is also popular, with 14 victories. Dutch and Hebrew songs have won 3 times each.

* Dima Bilan, 26, gave Russia its first victory in the Eurovision Song Contest in 2008 with a rock ballad "Believe."

* Lena was the second German winner of Eurovision, the only other, being in 1982 with Nicole's anti-war ballad "Ein bisschen Frieden" (A Little Peace).